Astonishingly LPS is 20 years old on October 1st! We thought we would like to let newer members know a little bit more about how the club came into being. The following is taken from this website Run through a brick Wall: A sideways look at the history of Liverpool Pembroke Athletic Club (1890-1995). Look it up later!
Serendipity
Sometime in the winter of 1995/96, the then secretaries of the two oldest athletic clubs on Merseyside (disputed territory but we’d better not go there for fear of offence!), Sefton Harriers (1889) and Liverpool Pembroke(1890) were walking a cross country course. Both Robbie Wood of the black and

white hoops and Charles Gains of the red variety were acutely aware of their clubs long and distinguished histories but the conversation surprisingly turned to the prospect of a merger. Already within the sport there had been mergers brought about largely because for many clubs the recruitment pool was drying up. There were, simply, too many clubs chasing too few potentially committed athletes, as they still do. The prospect of members accepting this was slim but as the clubs had enjoyed a long amicable relationship it was decided to take the proposal to their respective committees for exploratory talks.
Astonishingly the proposal aroused considerable interest and it was agreed final decision would be taken at the clubs respective AGM`s of that year the

crucial date being September 15th. The Sefton club duly gathered at their headquarters, Sefton Rugby Club while the Pembroke contingent made their way to Bootle Stadium. Of course, the matter had been hotly debated for about three months and the issues were clear to everybody. Nevertheless, both Wood and Gains stood at the same time, as agreed, to outline from a prepared text the pros and cons of a merger to packed audiences. Debates followed, everybody had their say and ballot papers were prepared.The Pembroke result came up first and there was an amazing vote of 92% For. Sefton took a little longer but everybody remained rooted to their seats. Eventually the telephone rang and Sefton had recorded a massive vote of 88% also For. Applause broke out simultaneously some three miles apart across the city. Athletics history had just been made.

The birth date was to be October 1st, 1995. It was a breathtaking risk, the decision had taken both clubs into new and exhilarating territory. But would it work?
The last to wear club vests
The Northern Senior 6 Stage Relay was held on 30th September, 1995 at the Don Valley Stadium, Sheffield. Runners were aware that this was the final moment they would compete as separate entities. The stronger Pembroke squad were to have the best of the day. The results and positions were as follows.
Pembroke A Team 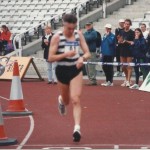 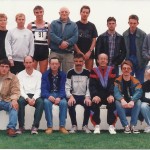 But who was the first?
Sunday, October 1st dawned and most had barely got out of bed when distance star Marty McLoughlin was the first of the GB runners home in the World Half Marathon Championships in France. His time was 64.26. Anybody want to try and better that now? Actually he had an even quicker PB of 62.45 set in Oslo a year previous. What talent! Interestingly he insisted on paying his subscription immediately so that he would be the first recorded member of the new club.

Was it the right decision?
Take a look around. This is the week that the magnificent facilities at Edge Hill University were opened by Katarina Johnson-Thompson and the track by Steve Cram. No one could have envisioned such a wonderful birthday present. The last 20 years have been outstanding with numerous Northern and National titles, international selections to the highest level, gold and silver European medals, top English School medallists, National cross country individual and team victories and literally hundreds of county team and individual successes across all disciplines. The club has also advanced professionally in terms of administration and coaching excellence. A thoroughly modern athletic club. Our predecessors would be proud of us.
Happy birthday LPS!
Charles Gains 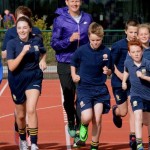 All smiles at the new track 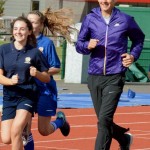 A lap around the track with youngsters from local schools 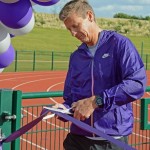