You are here: Home > Kirsty Queen of the Hill

Kirsty Queen of the Hill

The hugely popular Parbold Hill Race, superbly organised by Skelmersdale Boundary Harriers, enjoyed its 46th year. Held over a tough 7 mile multi-terrain course it is a challenge that appeals to a cross-section of the running fraternity. The mud was again there but the weather was kind and 442 completed. Liverpool Pembroke Sefton star Kirsty Longley, now in her 40th year, is a fearless competitor and there are only a few men who can better her, especially in such a demanding conditions. She powered her way to 15th overall but a minute clear of the next lady. She is truly achieving legendary status. Two other LPS members completed John Halson(34) and Robbie Wood(54) both claiming second place in their respective age categories of Over 50 and Over 55.
The Mid-Lancs Cross Country League is nearing its conclusion and the penultimate match took place at Rossall School, Cleveleys. The Under 15 Boys have been strong all season and with Adam Jones(2), Ross Harrison(4) and Joe Houghton(5) supported by Alex Lang(12) there was no doubt about the winners and also the league title before the final act is played out. The Under 17 Women are similarly dominant and with Morag Molyneux(2), Charlotte Mawdsley(6) and Jessica Gonzalez-Green(7) coming home unchallenged and securing title medals. The only other team to complete was the Senior Women. Consistent Clare Constable(12) and improving Corinne Molyneux(17) needed Julie Lang(113) for 12th team slot but this was enough to guarantee 1st Division status next season. At U11 Alicia Woods made her debut for the club finishing 27th while James Roberts was 21st. At U13 Mark Roberts was a good eighth.
Only two Under 20s went to the England Indoor Championships at Sheffield neither surviving the heats but coming away with good times. Elliot Jones ran 7.14 for the 60m and Ed Latimer 50.12 for 400m. Previously in far away Karlsruhe, Germany, Michael Rimmer made a rare indoor appearance recording 1.49.72 for 800m.
The Ormskirk Park Run over 5K held at Edge Hill University is regularly used by athletes to test their fitness. Jonathan Bride burst well clear of the other 170 competitors and raced to a fast 16.49, beating his best. He is well pleased with that time. Vicky Jones was ninth on 20.34.
After his team medal in the L&D champs last Sunday Sammy Rashid picked up 2nd O/50 prize at the Bramley 20 mile on Sunday with a time of 2.04.18, although 27 seconds slower than last year
he was still pleased with his time and his nice prizes.
Charles Gains 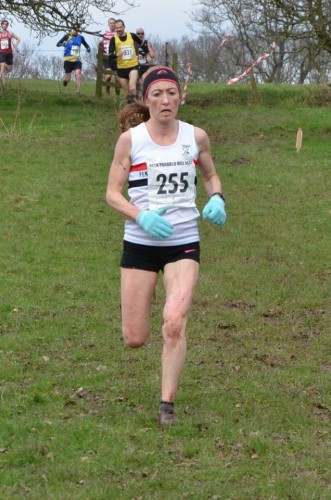 Kirsty Longley in action at Parbold

← Here, there and everywhere!
Rimmer progresses →