You are here: Home > Opening match of the cross country season

The first of the Mid-Lancs Cross Country League matches was held in the Astley Park , Chorley, although runners had little time to admire the magnificent Hall. In excellent weather the Liverpool Pembroke Sefton athletes performed strongly, none more so than Under 17 Adam Jones who ran a mature race beating off the challenge of a Kendal runner to coast home first. He was supported by Ross Harrison in fourth spot and with Matt Richardson, Joe Gordon and Glenn Sherwin well placed the team title was secure.
At U15 Tom Dickinson was a strong 7th and he had new-comer Tom Corcoran and Matthew Russo for company. At U13 Jake Dickinson(11th)led the way followed by a string of other promising runners in the shape of Nicolas Usher, Liam Harrison, Alex Procter, Sean and Matthew French, Daniel Rathbone, Jack Hitchmough and Alec Bridges. The strength of the U11s was similarly encouraging with Isaac Dickinson, James Roberts, James Read, Jamie Cowen and Josh Price running well.
The U11 girls were led by Lucy Bousfield(16th) just in front of sister Chloe and Abigail Slater. At U13 there were three who completed, Olivia Morgan, Ruth Usher and Libby Houghton. Lois Owen was first home fr the club in the U15 race in 10th place with Amelia Hitchmough, Fran Price, Isobel Fearon and Annabel Corlett completing a team. Flossie Dickenson(6) and Harriet Foley(7) were impressive in the U17 Women`s race.
Only two seniors showed Vicky Jones(115) and Danny Gilbody(107). It was a good day for the club though with numerous results in the lower age groups in particular to delight coaches and management. 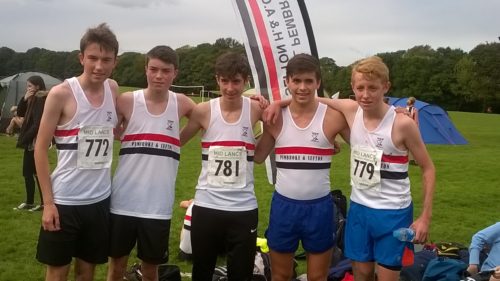