You are here: Home > High Jumpers Shine In Hyndburn Sun, and Matt Ingram in good form at Bedford

There were some strong personal performances despite the breezy conditions at the Mid Lancs League fixture at Hyndburn.

This 3rd meeting of the season fell on a sunny Bank Holiday Saturday which no doubt contributed to a low turnout of LPS athletes at this pleasant Lancashire setting.

Arguably the most exciting event of the day was the U17 mens’ high jump where Owen Southern (1.90m), Tom Kwissa (1.85m) and Jamie Hopkins (1.75m) all recorded personal bests to take the top three places. Also in the high jump, Alexander Steele (1.30m) was third in the U13 boys, Niamh Doyle (1.57m) was joint first in the U15 girls, closely followed by Ebony Raw in third place (1.50m). In the U15 boys, Sandy Clarkson (1.70m) took first place, Jacob Garrity (1.55m) was fifth and Michael Henderson (1.45m) jumped a personal best to come seventh. In the U17 women, Imogen Ayres jumped 1.50m to win the event, while Kai Finch cleared an impressive 1.95m in the senior men’s event, taking second place.

In the U17 women’s shot putt, Jessica Groves threw 7.62m to take fourth and Bill Steele recorded 12.18 to win his second throwing event of the day. Roisin O’Connor (7.76m) was third in the U15 girls. Jessica Groves also threw 36.10m to come fourth in the hammer, and 21.19m in the discus to take third place.

Matthew Ingram (13.81m) took first place in the senior triple jump while relative novice Harry Steele was first in the U17 men’s event with a fine 11.21m.

With such depleted numbers there was little of chance of assembling many full relay teams, however the U17 men were still able to round off the day with a strong 46.30 in the 4x100m.

With the male team now standing in a provisional 2nd place in Division 1, and the females in fourth, the club will be hoping for a strong turnout in round 4 at Litherland Sports Park on 30 June. Provisional results
Report Chris Hannaway
Photos by Ian Doyle 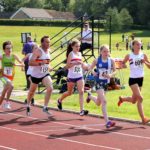 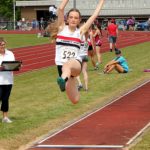 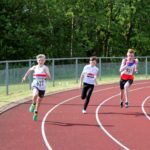 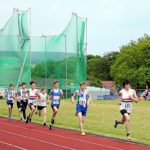 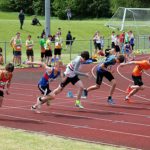 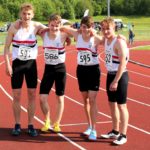 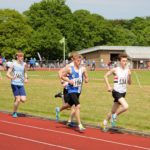 Bedford International Games
Matthew Ingram had a busy weekend after his competition at Hydburn he made the long journey to Bedford to compete against some of GB’s best horizontal jumpers.
Matthew was placed in top pool and pitted him well against some very experienced England internationals. On what was a very warm day combined with changeable wind conditions Matthew pulled off his second best jump to date (6.82m).
A good days work and an excellent platform from which he will continue to progress from. There is no doubt that Matthew can hold his own amongst the best of his age
Report Phil Whitfield