Ten club members made the short trip to Lancashire on the 23rd May for the first race in the four race series of the Harrock Hill series, this popular 5 and a bit miles race takes in some lovely countryside as well as being a testing course for those who like of off road events with some hills. There was a record field on a very warm summer evening.
Andrew Foster v/45 was first home for the club in 16th place running a very fast 37.45, next was club stalwart Greg Callaghan V/55 in 43rd place closely followed by John Dickinson v/50 just 3 seconds and one place behind. Debbie Campbell was 53rd and second woman home, Sam Carr the baby of the team U/23 was next in 56th place not far behind Debbie. Fresh from his first triathlon the previous Sunday John Halson v/55 was 67th, Robbie wood V/60 was 89th just a head of Mark Hudson v/55 in 96th place. Ian Doyle v/40 was 147th and Flossie Dickinson another baby in the rank U/23 was 150th.
A total of 225 athletes completed the however the evening was overshadowed by the death of Pete Weatherhead of Wirral AC, Peter who was 67 collapsed and died during the event. Like many of our older club members I had know Peter all my club career and I was chatting to him on the start line before the race something I had done many times before. A nice man and a fine standard club athlete who I had many battles with over many years. Results

Halewood 4 miles
The first race in the Halewood Fab 4 was held on the 25th of May and the club was represent by a muster of three athlete . Adam Jones ran a well judged race to finish second in 22.20. Andrew Conway V/50 continued his current good form by finishing 22nd in 26.53. It was nice to see Stephen Lennon V/40 back racing regularly again recording 28.05.
Results 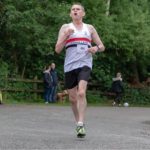 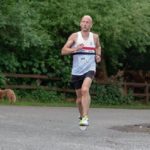 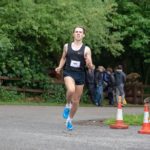