You are here: Home > Top Performances at County school Champs

For many youngsters, Saturday was the final day for them to achieve the qualifying standards for this year’s English Schools Track & Field Championships. LPS athletes were mainly split between Bebington Oval (Merseyside) and Stanley Park, Blackpool (Lancashire) as the venues for this year’s county schools championships. Conditions at both venues were ideal, so the stage was set for some outstanding performances.
At Bebington, it was the high jumpers who stole the show. Owen Southern won the Intermediate Boys event with a leap of 1.95m, his best ever. At junior level, Sandy Clarkson took gold with 1.75m in the boy’s event while Niamh Doyle won the girl’s event (1.60m), both recording pb’s in the process. Although absent on the day, Kai Finch had already reached the qualifying standard for the forthcoming school’s championships. In addition Tom Kwissa (1.75m) & Imogen Ayres (1.50m) both claimed silver at Intermediate level. I doubt many other clubs in the country will be able to match the achievements of Dave McComb’s high jump squad.
Also at Bebington, Bill Steel had an impressive championships , winning both the shot (12.91m) and javelin (43.21m) at junior boys level. His performance in the shot saw him move up to 4th in the UK rankings, while his pb in the javelin was over 4 metres longer than his previous best. Matthew Hughes(JB) also set a new pb winning his heat of the 200mIn in 24.2 sec, but his time of 24.3 in the final was only good enough for 4th place. Michael Henderson (JB) ran a season’s best (4:50.4) to finish second in the 1500m, Stanley Benson(JB) took bronze in the triple jump (9.09m), as did Cara Tamburro(JG) in the javelin (17.86m).Erin Birchall (IG) took gold in the long jump (5.11m) and bronze in the 100m (13.2) while Jenny Williamson improved her 1500m time (5:17.4) when she took silver. Tom Corcoran will be pleased with silver in the 1500m (4:40.3) but Callum Garvey will be disappointed with 4th place despite running 12 sec in the 100m.
At Blackpool, Matt Ingram (SB) was the stand out performer, taking gold in both long (6.83m) & triple jump (14.49m). His triple jump was a new champ

ionship best performance and club record. Also in this age group, Adam Jones took silver in the 2K steeplechase (6:18.0) and Ross Harrison bronze in the 1500m, knocking 7 sec. off his pb in the process (4:08). At Intermediate level, Lauren Lewis was an impressive winner of the 100m (12.4) and Tom Dickinson finished 3rd in a new pb time of 2:03.0. Hope Kennedy took javelin gold with a throw of 28.65m in the junior girl’s event, with Grace Mitchell winning silver in the long jump (4.63m) and Abigael Bamber bronze in the sprint hurdles (12.6). Martha Simms was the club’s sole competitor at the Greater Manchester schools event and although she set a new pb in the long jump (4.85m) it was only good enough for 5th place in a quality competition.

A few club members competed in the northern championships at Sports City over the weekend. After taking part in the schools events on the Saturday, Matt Ingram moved to Manchester on the Sunday where he took silver (14.23m) in the triple jump event. Jenny Pyatt produced a season’s best throw in the discus (42.08m) in her first season as a senior athletes and Kirsty Longley had to settle for 5th place in the 5K (17:10.99) in a quality field, but should be pleased with a 26sec.pb. 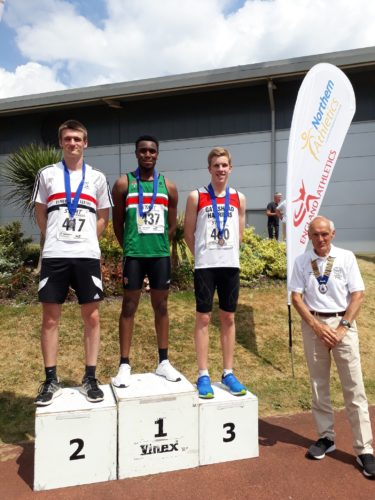 Matt Ingram on the podium at Northern Athletics championships 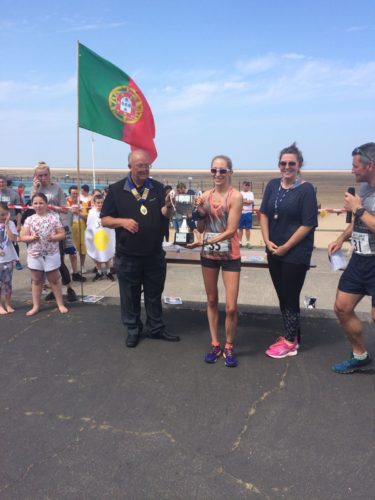 Hoylake 10k
Lisa Gawthrone continued her recent good form by winning the Hoylake 10k in 39.00. The course which also took in some running on the beach was not easy so her time was even more impressive, she was 5th overall in the event. 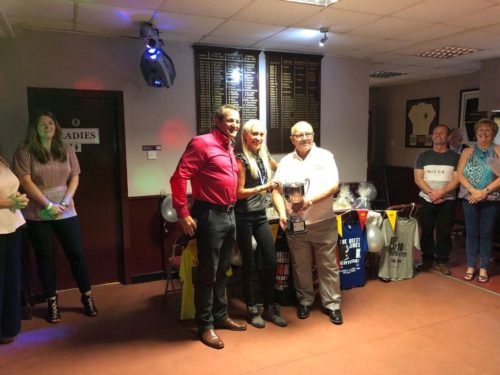 Lisa being presented with her winners cup at the presentation evening.