You are here: Home > Walter Bridson

It is with deep regret that I report that our former club secretary Walter Bridson died on Saturday 8th December 2018, aged 71.

Wally Bridson: An appreciation
It has fallen to my lot to write many appreciations but this is by far the hardest. There are human gaps that are, or never will be, truly filled. Wally is among the few individuals that have had that effect.
As the club historian, of the Pembroke inheritance at least, I frequently reflect on the qualities that have enabled clubs such as ours to last well

beyond a century and it is not difficult to identify a stream of administrators, in an almost unbroken link, that have taken the club from modest beginnings to the vibrant modern era. Wally clearly belongs to that distinguished group of baton-carriers.
Those that have had a stab at Club Secretary will understand how increasingly complex and demanding the task can be. From day one of his tenure Wally brought not only his considerable previous expertise as a former deputy head teacher to the task but almost daily added something else, mastering technology and adding officiating skills to his already impressive repertoire. Latterly he had also taken on the role of writing press/website reports a task he enjoyed the most. He was an outstanding administrator.
But there was a lot more to this incredible man. Again, no doubt garnered from his teaching background he knew everybody`s name down to the youngest and newest recruit. He would spend large parts of his trackside time offering a word of gentle praise or encouragement of equal measure to the most modest of performers and as to those who gain the highest of honours. He dealt particularly well with individual problems that inevitably came his way resolving them calmly and with dignity. He was, in short, the complete administrator and empathetic human being.
His contribution to local schools athletics was immense. He was utterly reliable in all roles and local teachers will have a hard job filling his shoes. Increasingly he was also highly regarded at Merseyside county level and there will be many there mourning his departure. In terms of service to the sport he was barely half way to a highly distinguished and memorable career.
It is hard to do justice to this unforgettable man with so many attributes. I will personally miss the innumerable conversations at the track and travelling to and from competitions. We shared the same ambitions for the club and rejoiced at the many advances over the years. No greater compliment can be made than for the rest of us to continue that journey.
Throughout his illness Wally had terrific support from his family, wife Margaret, children Andrew and Sarah and grandchildren.
Charles Gains 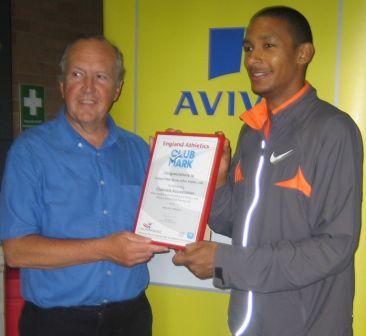 ← Tiffany picked for GB
Tiffany performs at the highest level →