You are here: Home > Tiffany performs at the highest level

Tiffany performs at the highest level

Tiffany Penfold astonished a few with her GB Under 20 selection for the European Cross Country Championships hosted in Tilburg, the Netherlands but she justified her choice with a stirring run. The course was typically `continental’ with long, flat, lakeside stretches of sand and a scattering of artificial barriers. The start was always going to be fast and furious but Tiffany battled through to 36th which should be set in the context of about 90 elite athletes. Tiffany was sixth GB counter, the first Amelia Brock in fifth place only a mere 36 seconds away. The GB girls packed splendidly to take team gold and in the tradition of the Europeans Tiffany was to find herself on the winning podium complete with medal as the national anthem was played. This will surely give her a taste for quality competition. Coach Mark Bleasdale made the trip in support and is now adjusting not only for the next round of cross country races but looking further ahead to a fast 3000m in the Track and Field season. 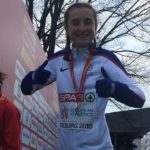 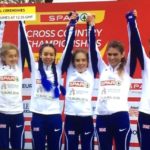 At perhaps the more mundane level of competition of the Liverpool and District Cross Country League there was a splendid turn out for the final fixture at the Beacon, Skelmersdale. Liverpool Pembroke Sefton already looked good for second overall in this final fixture. Chris Maher(7) and Mark Wynne(8) led the charge over a tough traditional course followed closely by Ross Harrison(10) and Ian Roberts(13). The packing still looked good in spite of a slight slip to Phil McDonald(24) and final counter Bernie Murphy(25). The Liverpool Harriers team management looked decidedly uncomfortable at this point and more than relieved when they scraped home first by a handful of points from a jubilant LPS team. The remainder of the LPS contingent followed, Paul Milburn(30), an excellent leading female Debbie Campbell(38), Graham Cairns(43), Danny Gilbody(44), John Halson(46), Chris Pedder(48) Lee Anderton(49), Richard Beesley(56) and Richie Webster(101). A good turn out and an equally good result.

The turn out at the Mid-Lancashire League fixture at Hyndburn was down on the previous encounter at Sefton Park but still served up some satisfactory results. The Under 11 Boys were led by Isaac Dickinson(10) and with James Read(20) and Evan Williams(29) securing 5th team slot with James Roberts(32) and Harry Corcoran(34) also in support. The best team result fell once again to the Under 15 Boys. Jake Dickinson was a splendid individual second and with Mark Roberts(12) and Jared Nicholls(16) taking second team place. There was also good support in the shape of Se Loughlin(19) and Jack Hitchmough(40). In spite of an inspired third place by Oliver Sutcliffe in the Under 17 Men`s race the only other LPS male was Tom Corcoran(18).

Pride of place among the Girls was again U11 Sarah Yates in third spot. She continues to improve. Under 13 Girls had Alicia Woods(18), Chloe Bousfield(23) and Freya Ramsden(39) for 7th team while the U15s had Kate Sutcliffe(16), Freya Wissett(27) and Ruth Usher(36) present for sixth. Under 17 Annabel Corlett(9) and Senior Vicky Gilbody(19) ran hard but cut somewhat lonely figures in their events. The Christmas break now appears with the county cross country championships beckoning in early January.

Kirsty Longley was competing for the North of England in the Inter Area 10k held in Telford on 9th December was was first female Vet 35.31 and was third home for the North who came second in the team competition. 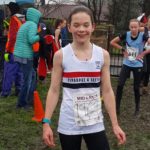 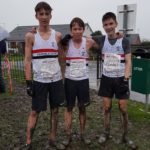