A group of LPS athletes took a coach to Sutton Park in Birmingham on Sunday to represent the club in the English National Relay Championships. First up were our U17 men and they produced an excellent performance, finishing 20th in the 3.88k three man relay. Fletcher Foster ran our fastest leg (32nd in 12:49) and handed over to Oliver Sutcliffe (25th in 13:08) and then onto Jake Dickinson to bring us home in 20th place (13:06). The future looks bright for these young men.

Our senior men had earned to right to compete having finished in the top 25 (14th) at the Northern. Dan Slater recorded our fastest leg of the day on the testing 5.88k course in a scorching 18:29 (39th) – his best race to date. Next up was Ross Harrison who battled bravely to a 19:23 time (47th) and onto Chris Maher who ran strongly (19:11 and 39th). Captain, Mark Wynne, took over and in spite of finding the going tough he managed a 19:32 clocking and held 39th place. Luke Edwards was next and he demonstrated his growing endurance capacity, running our second fastest time of the day (19:06 and 33rd place). It was left to the experience of Tony O’Brien to hold our position finishing in an impressive 19:08 and bringing the club home in a highly creditable 33rd place overall out of the 76 best in the country. The men’s team continues to go from strength to strength and an ambitious target of a top 8 position has been set for the Northern 12 man relays in the spring. We will need everyone to make themselves available for selection.

Finally, Kirsty Longley ran on leg one in the senior women’s race. She ran well, coming home in 10th place (24th overall on the day) in a loaded field. 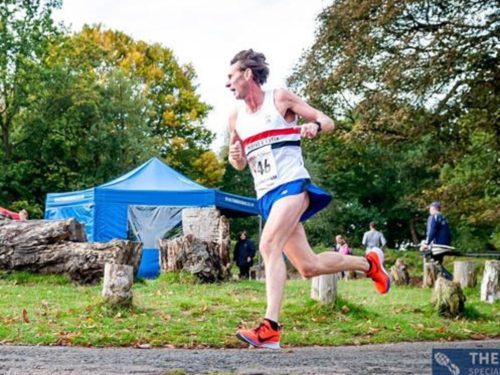 Tony O’Brian in action at the national road relays champs

← LPS dominate with local podiums
All eyes on Milburn & Conway →