The anticipated traditional January mud fest in Blackburn didn’t disappoint as the heavens had opened at least 24 hours earlier to ensure athletes (or their parents!) needed to invest heavily in washing machine powder!

We had 13 athletes representing the club across the U15 (boys and girls), U17 men, U20 men plus senior men and womens’ races, all of whom represented the club superbly as they tackled the infamous “saucer” , hill and mud at Witton Park. 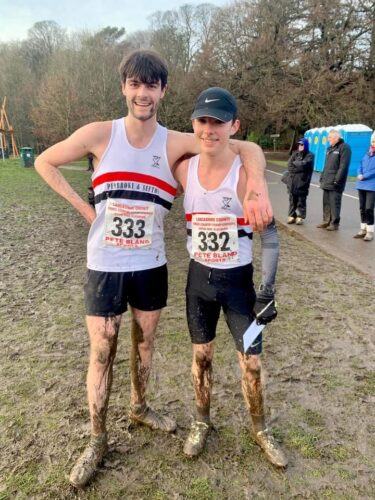 The day started with our younger athletes competing in the circa 3.8k trek around Witton Park with the start gun sounding at mid day for Miles Fraser and Isaac Dickinson in the U15 boys race, both of whom have progressed significantly over the last 12 months.  Both athletes kept the leading pack in their sight and finished strongly, each achieving qualification for the Lancashire team at either 1st pick or reserve.  Miles finishing in 6th place in 13:33with Isaac 31 seconds behind in 9th.

Next up, starting shortly after was the U15 girls race where sisters Sarah and Anna Yates took on their peers across the county.  Sarah, a year older than Anna, never ceases to amaze as she and an athlete from Chorley started to break away from the pack before half way. Sarah finished brilliantly in 2nd position, so securing her place in the Lancashire team.  Anna, running a year above her age, showed everybody what to expect from her over the next few years as she finished an excellent 9th ensuring that she claimed a reserve position in the Lancashire squad.

James Read was our sole representative in the U17 men race, he battled through over 5k of mud to finish in a credible 22:23creating 36 seconds of space between himself and the next finisher.

Likewise, Rachel Yates was our sole competitor in the senior womens’ race. Not to be outdone by her daughters (Sarah and Anna), Rachel finished 22nd overall and 9th in the Vets category over the 6.7k course.

The final race of the day was the senior men’s race where we had 4 representatives in the U20 and 3 in the senior men.  These athletes really did have to endure a mud bath as they climbed the hill and went around the saucer 4 times picking their way through ground that looked as if it could swallow you if you made the wrong move.

Our team started well with Ross Harrison (Senior) and Se Loughlin (U20) maintaining pace with the leaders for the 1st half of the race. Both finished strongly with Ross superb at 10th place overall in 36:04 ensuring a reserve position for the Lancashire Squad.   Se finished 13th overall 47 seconds behind  but was 3rd in the U20s category meaning the delighted Se claimed his 1st Lancashire vest. Hopefully the 1st of many!  Olly Sutcliffe, who has recovered from injury and is hitting top form again was shortly behind in 24th position overall but 5th in the U20s meaning his name is also in the frame for the Lancashire team.  Jake Dickinson completed the course in 40:15 putting him 37th overall but 7th in the U20 category.  Jake was followed home by Jarred Nicholls who finished strongly half way down the field but 9th U20.   These really strong performances not only mean that the club is well represented at county level but also that our U20 men’s team came 1st place. A fabulous achievement for the club.

In our vets category, John Dickinson (father of Isaac and Jake) produced a great run to come in 6th in the V55 category followed by the incredible Mark Hudson who (after recovering from a nasty injury in the last 2 years) completed the gruelling 9.8k course to finish 4th in the V60 race.

All in all, as coach Mark Bleasdale said at the end of the event, “ it was a really good days work on a proper cross country course that would test anyone”.

Well done to all and congratulations to those who have made the Lancashire team and will represent club and county in March.

The 28th Merseyside cross country championships held at Sherdley Park St Helens on 8th January 2022 emphasised how LPS has become primarily a Lancashire based club. A grand total of only eight LPS athletes all of them seniors entered the Merseyside championship, this is a natural consequence of the migration to our Lancashire base at the end of the last century. 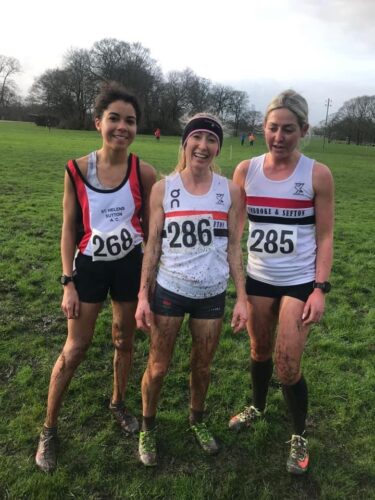 In the senior women’s event LPs took the first two places as reigning champion Kirsty Longley who run behind teammate Elle Anderson for the early part of the race pressed on during the last lap to regain her title by a 12 second margin from second place Elle on a very heavy and waterlogged course.

At 45 years of age Kirsty believes she is the oldest winner of this title, she now has her eyes on the upcoming Helsby half marathon in a couple of weeks time.

In the senior men’s race LPS were led home by Chris Maher in 9th place  he was supported by the evergreen Kevin Usher in 22nd place who also claimed the V/55 title. Tom Hankin in 38th ploughed his way through the mud and water for a very solid run. Chris Pedder 64th was next followed by Greg Callaghan in 69th. Chris and Greg had a good battle for a large part of this race until Chris got away later on and opened a gap. Chris also picked up his age category medal