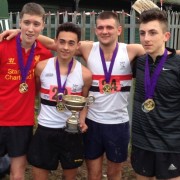 Liverpool Pemboke Sefton pulled off an unusual sporting double taking the same cross country title in two different locations. The club’s Merseyside Under 20s were at Arrowe Park and were led by a rampant Jai Vernon-McGuigan who stormed to victory. Ben Costello, as sound as ever, took the silver and with excellent performances from Warren […]