You are here: Home > Double joy for LPS 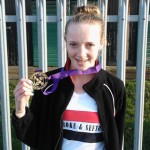 club’s Merseyside Under 20s were at Arrowe Park and were led by a rampant Jai Vernon-McGuigan who stormed to victory. Ben Costello, as sound as ever, took the silver and with excellent performances from Warren Turner(5) and Mike Bride(8) the team title was sewn up. Meanwhile, some 40 miles away at Blackburn, the red rose contingent were busy monopolising the Lancashire version.

also podium toppers. The club can look forward to an intriguing Northern Championships in a few weeks time.

Back at Birkenhead Rosie Johnson was defending her Under 15 title which she did in her usual style by sitting in with the leaders and destroying the opposition in the final half mile. Not for nothing is she earning 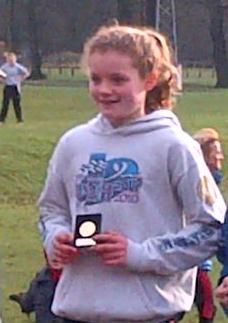 Morag Molyneux with her winner’s medal

the title of the `smiling assassin’. There were two other gutsy silver medallists in the shape of U13 Matt Richardson and evergreen senior lady, Kirsty Longley. The races also include selection for the inter-counties championships and U15 Dan Wright’s 5th should earn him a call up. Merseyside Results

At Witton Park there was a stunning victory for Morag Molyneux in the U13s. She certanly has a bright future. Ryan Blackwell additionally took an individual bronze at U17. There were a couple of useful third

team placing both at U15. Anna Hulme(8), Corinne Molyneux(12), Charlotte Mawdsley(17) and Rosie Walsh(21) combined well as did Ben Singleton(7), Jack Crook(15), Chris Webber(17) and Joe Chadderton(25). Again county selection was on everybody`s mind and Maxine Thompson (7) at U17 has an outside chance of a prestigious vest. As a warm up for the forthcoming Northern and National events there were numerous positive pointers in the weekend`s activity. Lancashire Results 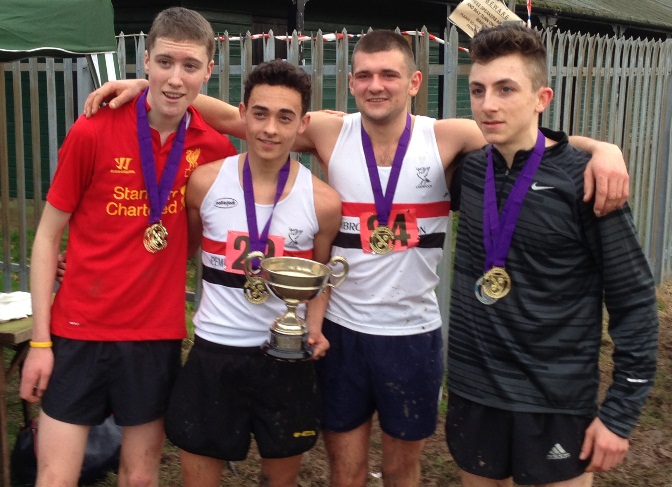