You are here: Home > Girl pride!

Kirsty Longley claimed yet another England vest as she competed in the British and Irish Masters Championships in Cardiff. The fast cross country course was not to 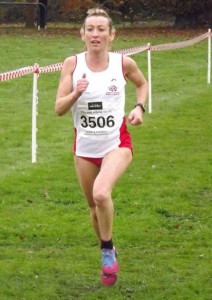 Kirsty Longley in action for England

her liking but she nevertheless finished a highly creditable 10th overall and 6th in her age category. The bonus was that she was a counter in the victorious England and came away with a highly prized gold medal and an unforgettable memory. While the women`s captain was representing her country the rest of her Liverpool Pembroke Sefton colleagues were also enjoying success.

At the Southport Sandgrounder 10K Maxine Thompson was 21st and the first female home in  43.32 followed by second placer Kirsty Mackenzie on 23rd with 44.06. Steph Barton was 26th and fifth lady in 44.32. Lisa Gawthorne gave this race a miss in order to attempt a personal best time in the Leeds Abbey Dash 10K. This is a highly popular race attracting well over ten thousand entries. Lisa not only made the top 1000 but recorded a highly satisfactory 40.32, some 38 seconds off her PB. Previously the club’s Paris-based Zoe Tarrach had run in the more exotic location of the Nice-Cannes Marathon. In spite of not being 100% fit and facing some nasty head winds she recorded 3hr 24mins, a measure of her considerable potential.

The party for the girls was not over as at Wavertree in the Schools Merseyside Cross Country League Open Race international Rosie Johnson (Rainford) marked her return to winter competition with a comfortable win. Another star in the making Morag Molyneux was 4th in the year 8/9 girls with Ellen Murgatroyd on 35th, both Merchant Taylors. The Sacred Heart pairing of Katie Richardson(13) and Charlotte Graham (22) graced the Year 7 race. It wasn’t an entirely girl’s weekend as in the Senior boys event LPS had a 1-2 in the shape of a dead-heating Warren Turner(Deyes) and Ryan Blackwell (Runshaw). Jonathan Bride (Runshaw) was not far adrift in 4th. Another winner was Dan Slater(Sacred Heart) in Year 9 Boys with school mate Matt Richardson 3rd. Joe Chadderton (Merchant Taylors) was 4th in the U16 Boys.