You are here: Home > Southern comfort and Jade joy!

The Northern Indoor Championships at Sheffield brought more quality medals for Liverpool Pembroke Sefton athletes. The diminutive Owen Southern was particularly impressive in taking the Under 13 High Jump title with 1.45m in spite of being the smallest competitor. Jade Murphy jumping at Under 15 and well under her age grouping leapt 1.55m with a narrow miss at 1.58m which would have given her the same gold as Owen but she had to settle eventually for silver. Another occasion for coach, Dave McComb to sport a broad smile.

Meanwhile at Manchester there was a good turn out for the Sale Harriers Open Meeting. Again the high jumpers prospered with Billy Williams on 1.80m and Amelia McLaughlin on 1.75m, still chasing that elusive 1.80m barrier. U15 Kai Finch looked good on 1.50m also. There was some sharp sprinting from Danny Higham(60m in 7.25) and U23 Adam Thomson(200m in 22.89). Harry Doran once again went for 600m and recorded a respectable 1.21.42. For the rest this type of meeting is all about chasing personal bests and testing oneself for the forthcoming summer season.

The schools Cross Country Championships were another feature of the weekend. The Merseyside in Liverpool produced what is becoming regarded as predictable victories for some of the club`s talented harriers. Kyle Robinson-Murray was first home in the Year 7 race and Daniel Slater took the Junior version, both competing for Sefton schools. Northern bronze medalist Rosie Johnson, running for St Helens, was untroubled in her category. The Lancs Schools were at Blackburn and the most significant results there came from U20 Ryan Blackwell who was fourth, Maxine Thompson 8th at the same level and Anna Hulme 6th in the U17 race.

Members were scattered everywhere  but none further than Toby Loveridge who was running in the British Universities Cross Country Championships at Stirling. After a good result in the previous weeks Northerns he expected a decent performance and got one, running out 17th and helping his university, St Marys, take the team title. 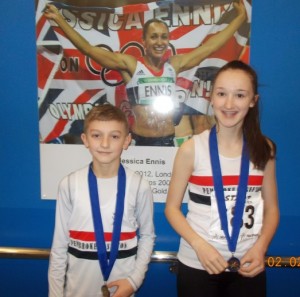