There was a strong contingent of Liverpool Pembroke Sefton athletes at the Trafford Grand Prix on 21 July.

The 800m races saw a series of PBs for LPS athletes.  U20 Jonathon Bride set the ball rolling with a strong run in race 2. Going from the gun, Jonathon took the field through the opening lap in 59.1s, before battling hard down the home straight to record a new PB of 1.58.62 for 4th place.

U17 Jack Crook followed on in race 3 with another blast of front running. Going through the bell in the lead Jack got cut up by another runner and lost momentum down the back straight. Despite slowing in the last few metres Jack ran close to his PB with 2.00.42 in 5th place.

Race 5 saw U17 Matthew Richardson move his PB forward by another couple of notches. Matthew kept working right through the race and finished 7th in 2.02.56.U23 Rob Parkinson made a welcome return to racing after a recent illness. Following his coach’s instruction, Rob ran at the back of the field on the opening lap before racing clear to win in 2.04.67 – a season’s best and spot on his pre-race target.

Race 15, the final 800m of the night, was worth waiting for 16 year old Charlotte Mawdsley. Charlotte bravely took on the pace-making and shot through the first lap in 70s. As two runners went past on the back straight Charlotte hung on to the them and, working hard in the home straight finished 2nd in 2.29.40, a new PB by just over 4s. 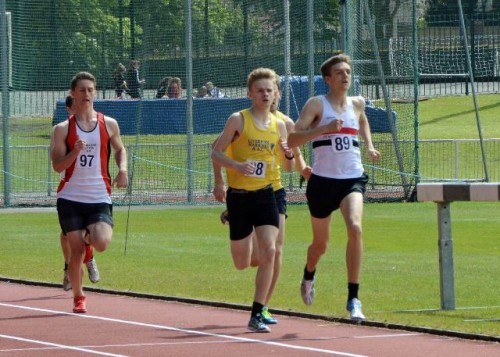