You are here: Home > Ticket to Beijing

Michael Rimmer produced a season best performance on Saturday finishing 5th in a world class field at the Olympic stadium in London. Always in contention, Michael found himself boxed in, but a gutsy performance over the last 50 metres saw him power through on the inside to record a time of 1:45.67 and secure the qualifying standard for next month’s world championships in Beijing.

A strong boys team had its fair share of winners on the day. Seniors Rob Parkinson 800m (2:04.8), Dominic O’Hanlon long jump (5.39m), Billy Williams high jump (1.80m), whilst U17’s Matthew Ingram long jump (5.60m)& Matt Richardson’s 2:05.4(800m) also secured maximum points. Meanwhile U15 Kai Finch continues to raise the bar in the high jump with a new pb of 1.76m The standout performer for the boys was U13 Ormskirk youngster Mark Roberts who was making his debut for the club. Although competing against boys a year older than himself he comfortably won the 800m race in a time of 2:24.9. Sam Latimer 100m (13.5) was the other U13 winner. The Mid-lanc’s league is very much a development league, giving many youngsters the opportunity to compete. Matthew Russo U13B knocked 10 sec off his pb in the 1500m (5:23.7) while Zara Bradshaw(U13G) can be equally proud of her performances in the 100m (14.6) and long jump (3.76m)

The indefatigable Kirty Longley ran in the popular mid-week Sefton Park 5mile race. She was again untroubled by female opposition finishing overall 16th. Her time was a surprisingly relaxed 29.04 beating her old club record of 29.18. In the same race Vet Andrew Conway was 99th in 34.17 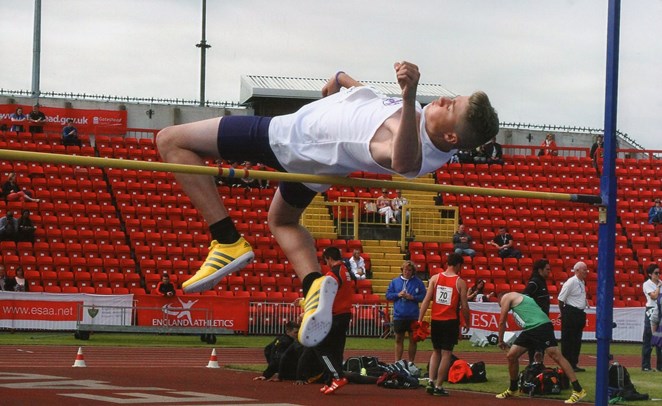