The mild weather was the only comfort for the hardy 114 athletes who turned out for the third of the Liverpool and District Cross Country fixtures at Beacon Park. On a tricky and muddy course Liverpool Pembroke and Sefton seniors battled hard but were a distant fifth in the team race as Liverpool Harriers, St Helens, Wirral and Wallasey filled the first four places.

Richard Weeks followed up his good performance at Sefton Park with an assured run in 17th place but he, like many others on the day, discovered that fell running shoes are no match for long spikes on the very muddy, cambered sections of the course. Bernie Murphy(23) showed his pedigree moving through the field to overtake Mark Wynne(31) in the second half of the race. Danny Gilbody(37), Chris Pedder(41) and the evergreen John Halson(41) were the final three counters and packed well with only 15 seconds separating them.

The have been some excellent results in the local road racing scene. Fifty year old Greg Callaghan set himself the task of running twelve 10Ks in twelve months. Hs penultimate race was the Wesham 10K where he was 27th and third O50 in 37.34 His final race, the Wilmslow 10K, saw him eclipse all previous times with an excellent 37.16, 56th overall and second Vet in his age group. An outstanding achievement. Also at Wilmslow Kirsty Longley was 35th with a stunning 35.45 and 3rd overall female. Tess Robinson(49) ran 36.44 while Andrew Foster(83) with 39.00 and Mark Hudson(152) on 41.58 also found the course to their liking. Previously Lisa Gawthorne had experienced a tense battle to the line to be first lady in the Pennington Flash 5 miler. 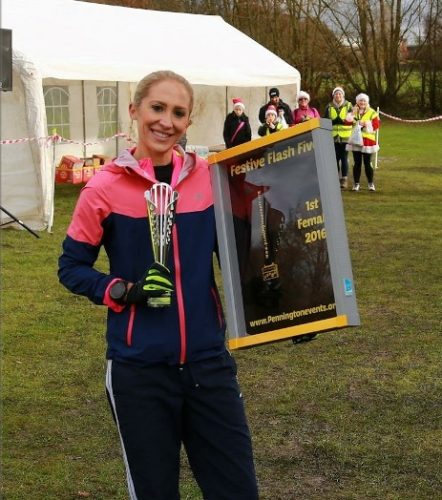