The 52 mile Tour of Merseyside, in its 6th Year now has its first LPS title as Victoria Gilbody surpasses her 2016 runners-up podium place with a Female winner’s trophy.
Over the past three years of entering the race, Vicki has gained a reputation for improving in stature & finesse through the six races across seven days and this year duly followed suit as she became the first person to wear the vests of third lady, second lady and leaders jersey within a single race week.
Coaches Mark Bleasdale & Dan Gilbody followed proudly as Vicki pushed herself to new levels, undeterred by one of the UK’s longest heatwaves in over 20 years, setting a new personal best half marathon in 1:35 (3rd overall) before going onto win her first ever stage at Thurstaston 6mile costal trail run in emphatic fashion the following day. On day 3 Vicki found herself leading the stage for the first 9 miles of 10 taking in Aintree, Walton & West Derby before being pipped to the line, this moving her up to 2nd Lady, 1min 48 down on the 1st placed runner heading into rest day.
On day four the tour reaches Otterspool for a 5mile fancy dress run along the promenade with most runners forced to reduce the amount of extra clothing due to the extreme temperatures and minimal breeze. Again, on one of the shorter stages, Vicki showed her increasing confidence breaking clear early on and continually increasing the gap to winning a second stage in 2018, moving to within 18seconds of the overall leader.
Stadt Moers, a parkland known only too well to the club’s cross-country runners, hosted raceday number five, a six mile trail run, where Victoria again went on the attack leading from the starters horn aiming for the illustrious yellow vest on the last day, taking a third stage win and moving to first placed overall and taking a 48second lead into the last day, a 12mile run on the Wallasey coastline taking in a mile of West Kirby’s splendour of sand and the slightly cooler air temperature of 26’c. The race changed on the last day with Victoria marshalling her rivals with great professionality matching every change of pace before moving forward herself and taking a 4th stage win and an overall time of 6 hours 11minutes.
other LPS finishers were Dan Gilbody 27th overall with a finishing time of 6 hours 15 minutes and Steve Cain who finished 243rd in a time of 8:53.47 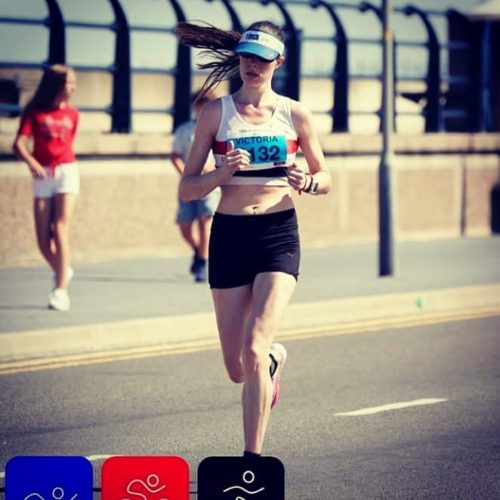