You are here: Home > Fast times at Mid Cheshire 5k

Fifteen LPS athletes toed the start line for this popular and very fast 5k Mid Cheshire 5k on Thursday 29th August. In what proved to be almost ideal racing conditions some very impressive times were recorded.

Young Dan Slater (Under 21) lead the club home in 28th place in 15.24. He was closely followed by the not so young but running as well as ever Mark Wynne V40 in 15.29, Mark has had a good season on the road and track and his consistent performances have been eye catching. Chris Maher was once again close on Mark’s heels and was chasing him down but ran out of road. Chris’s time of 15.35 must be pleasing and just reward for his hard work. The evergreen Tony O’Brian V45 was not far behind in 15.41, Tony has been a top quality athletes for many years and is not showing much sign of slowing down or losing his appetite for for racing at the highest level he can find. Ross Harrison (under 21) 15.52 and Luke Edwards 15.56 came home very close together and made it six LPS athletes under 16 minutes which is an outstanding effort.
The next batch of four athletes all under 21 showed what prospects we have in the club’s endurance squad,  Dan Jones 16.24 was closely followed by Adam Jones 16.35 and hot on his heels was Fletcher Foster 16.38. Sam Carr recorded a very respectable 17.41. Dan Gilbody dipped 20 minutes to record 19.50.

Debbie Campbell V35 18.35 was first of our women home, next was Lisa Gawthorne with another sub 20 performance of 19.50. Laura Purdy v40 continued with her progress at this distance with a very good 21.37.

Congratulations must go to coach Mark Bleasdale for his hard work and dedication over the past few years which has brought this squad together. 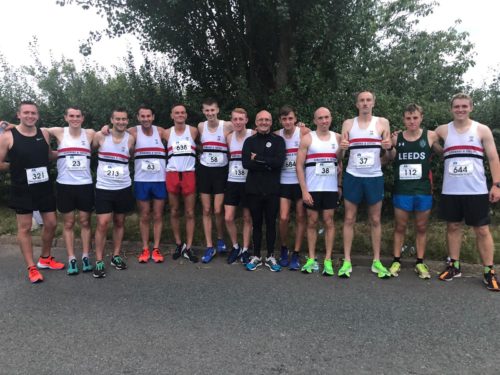