You are here: Home > Fantastic result for LPS men in the NW Relays while Kirsty Longley astounds at Salford

The North West Road Relays sponsored by Merseyside County and hosted by Liverpool Pembroke Sefton came to Edge Hill University. On a sunny day there was general appreciation of the facilities at the university, the course and the complex organisation that is required for this type of event.

For the local club there was a standout performance over the 4 x 5K course. Mark Wynne led with 16.01 time that had the club in a great 7th spot. Dan Slater(15.53) put up a tremendous run to hand over third. Chris Maher(16.15) clawed back another club for second. Veteran Tony O`Brien(16.14) had the anchor leg and held off the encroaching clubs for a truly magnificent runners-up place, only yielding ultimately to the highly respected Salford squad. Crucially this took the Merseyside gold medal and flagged up to local clubs that the previous winners of the District Cross country title are here to stay and in serious competitive form. This was a result that could only have been dreamt of a couple of years ago but coach, Mark Bleasdale, has transformed aspirations.

A further three teams completed, Luke Edwards, Ian Roberts, Dan Jones and Mike Gall were 15th overall and Jonathan Bride, Harry Doran, Phil McDonald and Danny Gilbody were 31st with a veteran`s quartet of Greg Callaghan, John Halson, Chris Pedder and Andrew Conway a creditable 55th. Of these Luke was the quickest at 16.17.

The Under 15`s over a 3 x 2800m course also ran brilliantly for 8th with Stanley Benson(10.12), Michael Henderson(9.42) and Oscar Davidson(9.47) collecting Merseyside bronze medals. There were another couple of teams, Conrad Lucas, Gideon Lewis and Jack Crichton on 21st and Daniel Rathbone, James Read and Oliver Farmer at 23rd.

The Under 17 Men, over the 5K lap, were also 8th but went one Merseyside place better. Fletcher Foster(17.08), Mark Roberts(17.29) and Oliver Sutcliffe(17.47) in a breath-taking finish against local rivals Liverpool Harriers were only one second off the coveted prize. Again the back-up was in place with Se Loughlin, Michael Kain and Jared Nicholls on 20th overall.

Although the women were less successful in medal terms they still performed well. At Senior level Tiffany Penfold was clearly not at her fittest but still ran strongly for a 18.39 lap. Lynn Rees and Laura Purdy supported for a decent 10th overall. Also Vicky Gilbody, Joanna Durkin and Rachel Yates were there for 26th. The U15 Girls saw Chloe Bousfield, Alicia Woods and Kate Sutcliffe 28th with Alicia(12.37) quickest. LPS also fielded a 13th placed club at U17 with Faye Hannaway, Jenny Williamson and Phoebe Lucas. Jenny(11.07) was sharpest.

The strength of the club was emphasised by fielding three capable U13 teams. Erin Frost, Iris Davidson and Hannah Wilkinson were 27th with Amy English, Anna Yates and Sarah Yates only two places adrift of that. Finally Olwyn Benson, Eve Hannaway and Katy Nicholson closed in 33rd. Of these Sarah Yates surprised with 11.50.

The Ormskirk venue is proving increasingly popular in the North West and more prestige events could find themselves enjoying the campus and its surrounds in future.

Finally, on a stunning weekend, the indomitable Kirsty Longley took to the City of Salford 10K with a determination to break her own club record. This she achieved easily with an outstanding 34.29. Twelfth overall was impressive but her female opponents could not live with such blistering pace, she was out of sight. The 41 year old is ample evidence that age does not necessarily slow you up. The performance gained her an England call up for the forthcoming City of Birmingham 10K. Such is her form you would not bet against her going even quicker.  Results

To crown off a perfect day Vicky and Dan Gilbody announced that  they are expecting their first baby in the new year. We wish them all the very best and look forward to another generation of the Gilbody family pulling on the club vest in the not to distant future. 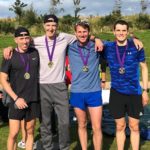 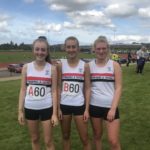 Under 17 girls who cane 5th on Merseyside and 13 overall 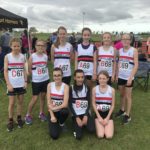 LPS Under 13 girls turned out in numbers at Ormskirk 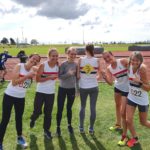 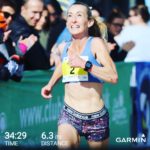 Another fantastic road run by Kirsty