You are here: Home > More success for LPS Senior Men

The Northern Combined Relays were again held at Manchester`s Sport City. Following the previous week’s success at the North West Relays, where overall second and first in the Merseyside Championships was secured by Liverpool Pembroke Sefton’s men, the question was how well would this figure in the wider, tougher Northern context. The answer became clear as Daniel Slater(24) led off with a 20.57 lap, Tony O’Brien jumped 4 places with 21.23 and Chris Maher was equally sound gaining one place with the same time. A place in the top 20 was very satisfactory but more was to come. Mark Wynne advance to 16th with 21.32, Luke Edwards a further place with 21.43 and a sparkling Ross Harrison(21.38) powering to a final 14th spot. Having finished in a similar position in the longer relays earlier in the year the club has not only secured its position in the Northern pecking order but has neatly positioned itself for a subsequent leap into the prestigious top ten.

There were no slouchers in the Under 17 team either over 3 laps. Fletcher Foster(12), Oliver Sutcliffe(10) and Jake Dickenson anchoring tenth, with Fletcher sharpest on 12.09 but the others not far adrift. The U15`s managed two teams. Oscar Davidson(16), Stanley Benson(13) and Michael Henderson stormed through also for a tenth placing in their category. Michael`s 11.50 tour was an eye-opener. In 30th place was also Jack Crichton(36), James Roberts(32) and Tom Liggat(30).

Although not at full strength the cheerful Senior Women`s quartet of Debbie Campbell(26), fastest with 23.38, plus Laura Purdy(30), Lynn Rees(30) and Vicky Gilbody(37) went home happy.

Another encouraging day for the local club with several of the squads anticipating at an appearance in the National event in Birmingham on October 6th. 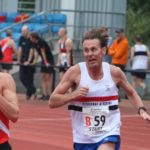 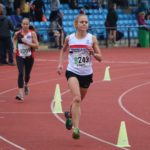