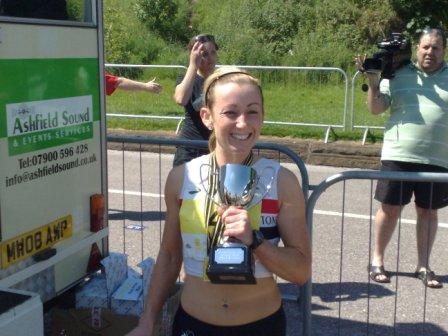 Kirsty wins again 31 May
Kirsty Longley is having a dream season and a fantastic run of success. In the unusual Tunnel 10K she took complete control of the All smiles as Kirsty collects her trophy for winning the Tunnel 10kwomen’s race and coasted home comfortably in 37.49. She now rates as possibly the most feared competitor on the district. Her Liverpool Pembroke Sefton colleague Lisa Gawthorn was 11th female in 44.54 while John Bebbington took second in the Over 60 event with a respectable 44.26.

Another class sprinter emerges from the LPS 400m stable 31st May
It was a glorious day at Wavertree as LPS hosted the third of the Northern Premier Young Athletes matches. As expected Liverpool Harriers dominated but an intriguing battle ensued between the powerful Leeds City and LPS, the latter losing out eventually but not without a dogged fight. There were numerous individual performances to relish but none more so than that of Under 15 Andrew Williams in his first season and turning in a grade 1 performance at 400m in 54.30, to add to a useful 200m win in 24.60. Another class addition to the club’s already very powerful one-lap squad.
At Under 17 Adam Thomson continued his good season with a sharp 100m(11.40) second place and 200m win(23.00). Toby Loveridge was untroubled in taking the 1500m(4.16.1) and other victors in this age group included Mike Carmona-Jones (Hammer 41.44m), Drew Atherton (Javelin 39.93m) and Billy Williams(1.85m), the elusive 1.90m just escaping him once more. At U15 Alistair Nelson was well clear in the 1500m in a good 4.31.8. The only winner at U13 was Ben Haines with a Shot Putt of 7.66m.
Winners were in short supply among the girls but there were excellent graded performances from U17 Jessica Broady 2nd in both Discus (24.10m) and Hammer(30.24m). U15 Twanda Lungu ran third twice but with excellent times in the 100m(13.2) and 200m(27.6).Buried in the U13 results Amelia McLaughlin leapt 1.40m in the High Jump for a top grade performance. The afternoon finished with the usual strong showing of the host club in the relays with U17 wins at 4 x 100m(47.10) and 4 x 400m from Adam Thomson, Mike Stam, Jesse Roberts, and Stuart Dolman. Emma Givens, Annie McLoughlin, Sarah More and Aimee Hall were likewise successful in the 4 x 100m(52.60).

Club Junior Men’s 4×100 Record Equalled 25 May
Dave Brown has spotted that our junior men’s 4×100 team at the Preston on 25th May 2009 equalled the club record for the event. The team of Harry Doran, Danny Higham, Nathan Hilton and Wayne Ashall, equalled the time 44.0 set in 2001.
They will now share the record with the 2001 team of Paul Edwards, Michael Zaim, Phil Taylor and Danny Holland who ran their time at Deeside on 29th July.

Sprinters on form 24 May
The Northern Under 17 Championships were at Gateshead and Liverpool Pembroke Sefton star Adam Thomson collected a silver medal at 400m with a sharp 50.21. Michael Carmona-Jones was fifth in the Discus with 37.61m while Kevin Jones was similarly placed in the Javelin(34.05m). While not making the finals Stuart Dolman ran 11.90 for the 100m and a respectable 24.13 for the 200m.
Meanwhile the rest of the club’s under 20`s were at Preston for the second of the Junior League (Merseyside) matches. International Harry Doran won the 400m in a grade 1 time of 49.4 enough to earn him Man of the Match award. Nathan Hilton took the B event with 52.2. Also up there with a top mark was Billy Williams, second in the high jump but with an excellent 1.85m. His journey to 1.90m should soon be over. Rising star Dean Matthews was well clear in his favourite event, the triple jump, with 12.88m, his personal target of 13m should not be too far away either. He was also second in the long jump with 5.96m. Both the men’s sprint relays the 4 x 100m(44.0) and 4 x 400m(3.27.4) were won by a Wayne Ashall, Danny Higham, Nathan Hilton and Harry Doran combination. The girl’s were gallantly represented across a variety of events by Hannah Roberts, Annie McLoughlin, Grace Stewart and Emma Binns, possibly the best performance coming from Emma who had a runaway win in the 1500m in 5.20.5. Given such a thin turnout the club’s final position of sixth out of eight was not unexpected.

Tough time at Doncaster 17 May
The Liverpool Pembroke Sefton Young Athletes were at Doncaster for their Premier League match. It was always going to be a tough occasion up against the powerful Sale, Doncaster and Gateshead teams and so it turned out. In spite of trailing in last though there were some scintillating individual performances especially Adam Thomson’s 400m win in the Under 17 400m in 50.70 followed by the 1.80m high jump of the fast improving Billy Williams. There were other single winners at U17 including Toby Loveridge(800m in 2.06.3), Mike Bride(1500m in 4.22.1), Mike Carmona-Jones (Hammer 38.97m) and a neat A and B double success in the 1500m Steeplechase for Jai Vernon-McGuigan(5.03.4) and Sean Kirkbride(5.04.9). The star for the women in this age group was Jessica Broady with an impressive Hammer Throw of 29.79m but Emma Givens(12.9) and Annie McLoughlin(13.3) combined well to take the 80m hurdle races.

At Under 15 Andrew Williams(55.90) and Joel Hutchinson(56.40) posted eye-catching 400m times. Under 13 Ben Haines stood out winning the Shot with 7.05m and usefully doubled up to win the 800m B event in 2.44.5. But it was more a day for honest endeavour, characterised by Kevin Carmona-Jones, George Curran, Zoe Rafferty, Tawanda Lunghu and a host of others who battled for every point. This difficult encounter was best illustrated when LPS came away with one relay win, the Mens 4 x 400m(Mike Stam, Adam Thomson, Jesse Roberts and TobyLoveridge). There will be better results in the next three matches.

Club Athlete of the Match at Sheffield
Thanks to the generous sponsorship from McCains this year, all clubs have been given 10 Tee Shirts, so that they can award their own athlete of the match awards. In the first match at Sheffield on 3rd May, there were two outstanding Grade 1 performances. Adam Thomson ran 22.7 in the U/17 200m whilst Amelia McLaughlin beat her own PB three times in the U/13 High Jump with 1.44m YAL ‘Athlete of the Match Award’ at Doncaster
Match two of the Young Athletes League was held in wet and windy conditions at Doncaster on Sunday 17th May. Despite the conditions, Billy Williams managed to jump 1.80m, a grade 2 standard, to win the High Jump and the club athlete of the match award.

Kirsty continues 10 May
Liverpool Pembroke Sefton star, Kirsty Longley, continued her great series of performances by finishing third in the highly prestigious Liverpool Women’s 10K Road Race. Her time of 37.04 took a huge chunk off her personal best. The solid two years of a tough training regime is paying off handsomely. Newcomers Catherine Terry and Lisa Gawthorne also posted useful times.
It was also the weekend of the county track and field championships. The Merseysides at Wavertree were run in atrocious conditions, wind and heavy rain. Nevertheless LPS athletes collected a fair share of the medals. Gold went to Under 17s Adam Thomson(200m in 24.00), Aimee Hall(100m in 13.7), Toby Loveridge(1500m in 4.14.7), Jess Roberts(400m in 55.9), Drew Atherton (Javelin with 40.66m) and Michael Carmona-Jones(Hammer 35.65m). U20 victors were Rhea Ellis(1500m in 4.55), David Forrester(1500m in 4.12.5) and Chris Hesketh(2000m Steeplechase in 6.33.9).
Conditions were better at Blackpool for the Lancashires were Alistair Nelson took the U15 1500m in 4.36.40 with another blistering finish and another LPS steeplechaser, Sean Kirkbride collected the U17 1500m equivalent with 5.12.10. There were numerous silver and bronze performances and an encouraging scatter of personal bests. Lancashire

The Kirsty Kick 4th May
It was a weekend when Liverpool Pembroke Sefton’s runners, jumpers and throwers all excelled. Top slot must go to Kirsty Longley who is developing a fearsome reputation for a finishing kick. She took the Women’s prize in the Waterloo 15K Road Race(58.13) with a devastating sprint to the line leaving ostensibly quicker opponents gasping. Some 48 hours previous she had done something similar in the Northern Senior League (Div 2) match at Warrington. Opting for the 1500m she appeared well adrift of the leader but produced an astonishing sustained charge over the last lap to surge to the front and record 4.43.0, chopping a massive ten seconds off her personal best. She is now arguably queen of the local distance running scene.  Results

Also at Victoria Park Charlotte Christian continued her inexorable advance towards 40m with another personal best throw in the hammer of 38.99m. She seems determined to keep the tension alive as she edges upwards week after week. Michael Zaim recorded a useful 100m/200m double in 11.5 and 23.2 and Paul Milburn made a welcome return with a 400m hurdles win of 61.0 and excellent performances elsewhere. The field event enthusiasts will be following with interest the quiet advance of Dean Matthews winner of the long jump with 5.42m but an even better 12.71m triple jump victory. He has star quality. Super-vets Dave Brown and Mark Line were everywhere in the throws department piling up massive points for the club but not enough to raise them above fourth on the day. Results

The club’s Under 17’s were at Sheffield and up against giant clubs Sheffield and Hull. Third spot would have been good but events turned out rather better. At U17 Adam Thompson took the 100m in 11.5 but even though pipped in the 200m recorded a Grade1 performance of 22.6. Quality efforts also came from Toby Loveridge,1500m in 4.11.1, and Jessica Broady with a 32.96 hammer throw. Tom Johnson (hammer 33.08m) and Billy Williams (high jump 1.75m) were additionally good winners. Under 15 middle distance runners Alistair Nelson(800m in 2.15.2) and Kyle Nicholls(1500m in 5.02.0) were victors and in Kyle’s case closely marked by David Reece(5.03.4). In the U13`s Alex Higham starred with a 100/200 double of 14.0 and 27.9 but hidden away in the results Amelia McLaughlin racked up a fine Grade 1 high jump of 1.44m.
The meeting closed with a run of excellent relay results that included three wins, U17 men 4 x 100m and 4 x 400m and U17 Women 4 x 300m. Up to that point the host club Sheffield were well away winners but Hull were clearly struggling. Spirits soared in the LPS camp and as they boarded the coach home came the news that they had edged past Hull to claim second spot 326 to 323 points. The bus `erupted’. The club will have a good season in this age group