You are here: Home > Kirsty… leader of the pack

Kirsty… leader of the pack

By Robbie Wood on August 6, 2012 in News
While attention was naturally focused on the Olympic Games elsewhere Liverpool Pembroke Sefton were faced with the rather more mundane task of surviving relegation from Division 2W in the Northern League in the somewhat appropriate surroundings of the Oval 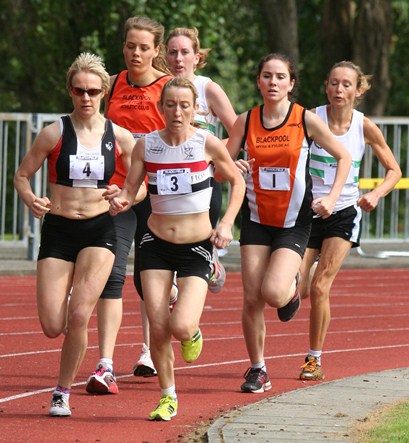 in Bebington where the track scenes from Chariots of Fire were filmed. Nothing less than an outstanding team effort was demanded and as usual in these circumstances the club responded. Kirsty Longley`s performances summed up the attitude. She collected the 800m in 2.22.9, the 3000m in 10.18.9, was runner up in the 1500m in 4.54.9 and even ran a stunning leg of the third placed 4 x 400m team. She not only inspired the women she had a similar effect on the men. Covering most disciplines the girls battled magnificently for every point but note needs to be taken of Ruth Doran whose Shot Putt (10.46m) and Emma Givens 100m Hurdle (17.3) victories caught the eye.

The men were more prolific on this occasion in terms of wins including Nathan Hilton(400m in 49.1) the A/B double acts of Rob Bland(1.54.1) and Rob

Parkinson(2.02.7) at 800m and Warren Turner(10.53.8) and Matt Thompson(11.13.1) in the 3000m Steeplechase plus super-vet Mark Line showing he still has plenty of punch in launching the Discus out to 36.69m. A smart 4 x 400m relay win and it was then just a question of counting the points. Astonishingly LPS, with numerous sterling supportive acts,  had trounced the remaining 5 clubs. This carried them not only to safety but into third place overall. When the chips are down this is a club that delivers.