You are here: Home > Kirsty tackles tough course at Barrow

The January Mid-Lancs Cross Country League match was held at distant Barrow, a deterrent to many competitors. However, this did not stop a Liverpool Pembroke Sefton trio of 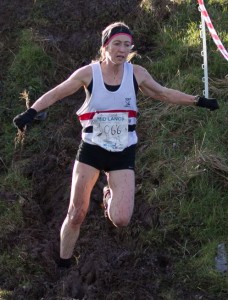 Kirsty Longley in action at Barrow

determined Senior Women making the trip. Over a tough muddy course Kirsty Longley was never challenged and the Merseyside champion claimed yet another victory. With Vicki Jones(20) and Kirsty Mackenzie(26) both improving each time out the LPS girls captured third team spot. This puts them well on course for overall medals of some description come the end of the season. Danny Gilbody was the only other member to compete and he was relatively pleased with his 82nd placing.

Previously the club’s track and field section were in early indoor action at the Open Meeting at Sport City. The high jumpers were out in force and with U15’s Kai Finch and Jade Murphy both recording 1.55m there was plenty to rejoice. But additionally Owen Southern cleared 1.45m and the Hannah Wills,/Jessica Star-Wohler pairing both 1.30m. Billy Williams topped his group with 1.83m and Amelia McLaughlin hers with 1.70m.  Amelia will be seriously eyeing the major summer programme and possible international selection at Junior level.

The short 60m sprinters included Emma Givens(8.52), Jessica Star-Wohler(8.51) and the impressive Morgan Greaves-Thomas on 7.48. Emma also did the hurdles in 11.35. Danny Higham (22.73) was not far off his best at 200m. Nathan Hilton recorded 23.48 and Joe Milton suffered a rare defeat with  23.90 albeit not at his favourite distance. Altogether it what was once called a useful `pipe-opener’ and predictor for the 2014 campaign.