You are here: Home > Successful day at Wigan

The first of the summer’s Mid Lancs Track and Field League was held at Wigan and over 40 Liverpool Pembroke Sefton athletes took part. For the seniors the 400m specialists Danny Higham(50.1) and Harry Doran(50.9) looked sharp in spite of a strong head wind in the straight. Ryan Backwell was dominant in the 1500m(4.13.5) and James Loftus posted a decent 9.16.8 as runner-up in the 3000m. Gary Ireland took the Shot with 11.45m and Dominic O’Hanlon reinforced his emerging  talent with a 2nd in the Long jump(5.81m) and third in the Triple(11.24m). Rachel Hutchinson was another good runner-up with 39.92m in the Hammer.

Possibly the most outstanding result among the Under 17s was Rosie Johnson’s easy 800m victory in 2.18.4. Evelyn Smalley will be also delighted with her wins at a 100m(14.00) and 200m(28.00). Charlotte Mawdsley started her season with a nice 5.36.2 1500m. Ed Latimer(53.4) paired with Morgan Greaves-Thomas(54.1) to take 1-2 in the 400m. There was a plethora of exciting results at Under 15. Kai Finch confirmed his national high ranking status with a 1.60m High Jump and was joined by Jade Murphy equally emphatic at 1.55m. Lily Maguire astonished with second and 1.45m. Tom Climpson threw a great 36.56m in the Javelin. One of the best performances of the day came from Dan Slater who crushed the field to take the 1500m in 4.29.2. The Under 13`s saw Lauren Lewis confidently take the 100m in 14.00 and the Long Jump with 4.21m. The High Jump section were on yet an other roll as Bethany Milton was joint first with 1.25m and Owen Southern was well clear on 1.45m while Hannah Wills equalled her PB and came fourth in the U17 event

At the end of the afternoon LPS had secured second place in Division 1 of the league and the women were on third. An impressive start to the season.

The Belle Vue House 10K enjoyed its fifth year at Edge Hill University superbly organised, as usual, by Skelmersdale Boundary Harriers. The beautiful weather contributed to a magnificent occasion. The course included roads, footpaths, woods and circuits of the Fitness Trail around the campus. Liverpool Pembroke athletes were prominent throughout with Lisa Gawthorne running smoothly and clearly first lady. She came home 20th overall in 40.23 followed almost immediately in 21st spot by Lauren Wilson(40.48). They did not have to wait too long either for Sam Wade to show 52nd in 43.44 and the first team prize was theirs. Kyle Nicholls was prominent early and although short of racing was a useful 7th in 37.56 with track specialist Paul Milburn 8th on 38.08. Vets Greg Callaghan 13th in 39.08 and Chris Pedder 17th in 39.56 followed. Again this was great packing and they collected first team prize. There was praise all round for the venue and organisation. 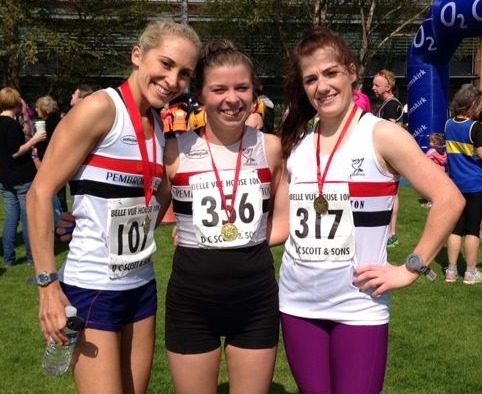