The Northern Athletics Road Relay Championships were at Sefton Park and an `out of the blue’ performance came from the Liverpool Pembroke Sefton women`s six stage team over a combination of short and long stages. Lisa Gawthorne(30.19) led off in an excellent 20th place followed by a very determined Lauren Wilson(15.06) on a short leg, overtaking four 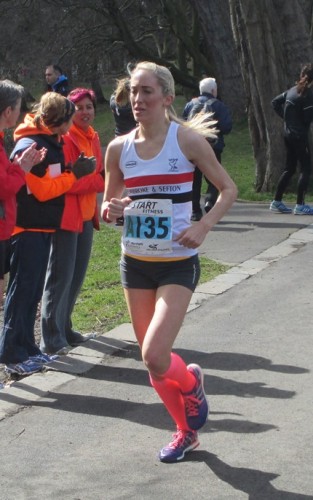 runners. Kirsty Longley(14.38) continued the push to 13th place followed by strong run from Clare Constable(30.49) who hung on determinedly to that position. The enthusiasm had already communicated itself to the final two runners. Sam Wade(16.05) jumped two places and Vicki Jones(15.56) completed with a flourish still on 11th. Club captain, Kirsty Longley, described this high ranking performance as `sensational’ and outgoing coach, John Bradshaw, was quick to add his praise to the squad.

The 12 stage men`s squad was greatly weakened but still produced some great indvidual runs. James Loftus led on 31st with a good 25.34 followed by a terrific short leg by Harry Doran(12.29) who leapt nine positions. Alistair Nelson(26.14) ran a sound 26.14, slipping only slightly to 25th. It was always going to be tough thereafter with Warren Turner(15.13) on 28th and Sean Kirkbride (27.29) grimly hanging on to the same. However, Jonathan Bride(13.30) produced an electric performance to take the club back to 25th. Vet John Halson(28.30) pulled out all the stops on 31st and the club could then have expected to go rapidly into reverse. But there were more stirring performances to come with Rob Parkinson(14.18) 33rd, Greg Callaghan(15.05) 34th, Mike Bride(14.27) 35th, Chris Pedder(14.50) pulling up to 32nd and Robbie Wood anchoring(15.32) in 33rd place out of 66 teams. Incoming coaches, Mark Bleasdale and Paul Rudkin, certainly have some talent and bags of team spirit to play with.

The Liverpool Half Marathon attracted its usual huge support. The day after turning out for LPS in the Northern 12 Stage Relay Greg Callaghan posted a great time of 1.21.11 in 60th spot. This was second in the Over 50 category. The ever-improving Danny Gilbody was 114th in 1.24.09 and Steve Lennon 317th in 1.30.26.