You are here: Home > Amazing comeback from Michael Rimmer

After a modest performance in the British Championships the Liverpool Pembroke Sefton 800m star, Michael Rimmer’s chances of selection for the World Championships in Beijing were all but written off. He needed to prove himself fast enough for the selectors. He did this in no uncertain style in Madrid. In a race packed with talented Africans and local aspirants he was sixth but, importantly, his time was an excellent 1.45.75. He is now more than likely to get the crucial call-up.

The next generation of potential international stars were at the highly regarded English Schools Championships at Gateshead, representing their counties. The best result for LPS came in the shape of Amelia McLaughlin(Greater Manchester) who was second the High Jump with 1.75m. In the Intermediate age group Joe Milton(Merseyside) showed promise as he progressed through the 400m rounds with times of 50.00 and 49.48. His time in a highly competitive Final was 50.58 which, sadly, sufficed for only fourth. Ed Latimer(Lancashire) ran a storming heat in 50.98 but failed at the semi-final barrier with 52.39. Jenny Pyatt (Cheshire) is very much on the up and her Discus throw of 37.74m got her sixth spot. High Jumpers Jade Murphy and Kai Finch , both Merseyside, were 12th with 1.57m and 19th with 1.69m respectively. The club’s only Junior Tom Climpson(Lancashire) threw a good 39.70m for 12th in the Javelin.

The bulk of the club`s seniors were at Ellesmere Port fr a Northern League match. Fresh from Gateshead Jenny Pyatt left everybody gasping as she threw 39.94m in the Discus to set a new club record. She also collected runner-up places in the Javelin(31.49m) and Shot(9.71m). The club male sprinters were solid ,as usual, with Nathan Hilton supreme at 200m(22.8), as was Danny Higham(49.4) doubling up with Luke Edwards(49.6) at 400m. Not unsurprisingly LPS took both 4 x 100m and 4 x 400m relays. Although only fourth in the 800m Matt Richardson ran an eye-catching 2.02.9. James Loftus and Matt Thompson volunteered for both 400m Hurdles and Steeplechase. Matt was the best at the one lap second in 65.4 and Kyle the dominant one at the `chase again second in 10.40.1. Another tradition in the club is that the throwers are always high place, Dave Readle and Mark Crompton had an active day in the field collecting numerous points, as did the eternal Mark Line. Matt Ingram and Dan O’Hanlon are developing into a highly productive partnership under the supervision of jumps coach, Phil Whitfield. Dan in second place had the better of Matt in the Long Jump(5.80m to 5.67m) but the position was reversed in the Triple as third placed Matt(12.12m) beat Dan(11.79m).

Newcomer Tessa Walker looked great in the 3000m taking second with 10.11.5. After finishing fourth in the Manchester 10K earlier in the day Kirsty Longley appeared at 1500m for third in 4.57.0. Clare Constable`s fluent style was in evidence as she ran a good 62.7 and 2.21.7 for third places in the 400m and 800m. It was good to see Rachel Hutchinson back in the throws especially third in the Hammer(36.42m) and Kate Doran who was second in the Pole Vault(2.50m).

Overall the club had a great day finishing overall third behind West Cheshire and Liverpool Harriers and guaranteeing security for next season in this quality league.

After Rosie Johnson picked up a GB vest in Switzerland finishing second in a classy European Under 20 1500m field comes news that Matt Slater has been selected as travelling reserve for a British Triathlon squad shortly setting out for competition in Barcelona. The club`s international reputation is increasing. 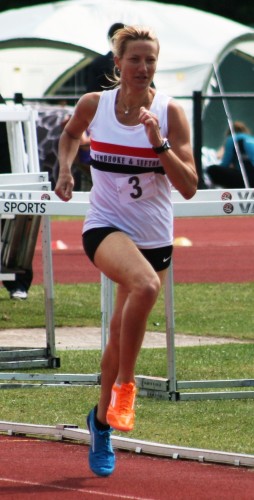