The pre-season open meetings continued at Stretford and a clutch of Liverpool Pembroke Sefton`s Under 15s attended. Star performer for LPS was Lauren Lewis who came away with three gold medals. She took the 100m in 12.9 and long jumped well clear of anybody else with 5.04m. She also won the 200m comfortably with 27.3. All three performances lifted her high in the national rankings. An exciting summer awaits 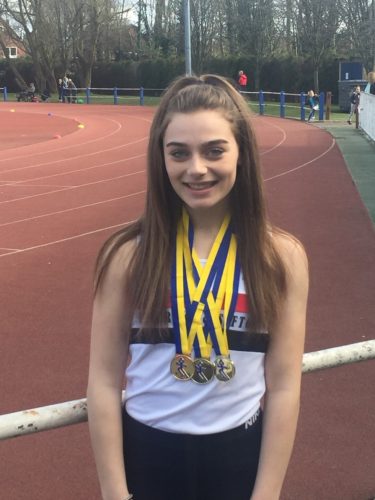 this talented young lady.
Another member who collected gold was rising starlet Alice Prescott with a 300m victory in 43.8 and who additionally took a silver behind Lauren in the Long Jump with 4.81m. A delighted Joe Houghton ran a splendid 800m for third spot in 2.12.5 and he too will be eagerly looking forward to the forthcoming season. The club’s high jumpers always deliver and Sadie McNulty was third on 1.45m as attention shifted to another in the coach Dave McComb squad, 13-year old Imogen Ayres who went over 1.40m for fifth.
Also at Stretford Lucy Le Marinel was 4th in her 100m with 14.1 and fifth in the 200m with 29.9 and Sadie McNulty long jumped 4.24m. There are not many clubs that will have such a range of promising Under 15s.

For some the cross country season continued. Jack Crook and Charlotte Mawdsley, both of Winstanley College, represented the North West Region in the National College Championships at Derwent Valley. Jack finished 14th and was part of the North West silver medal squad. Charlotte battled to 29th but with her team just out of the medals in fourth.

Over at the Port Sunlight 10K and Milburn ran a terrific 36.02 for 11th and team mates must be wondering why he doesn’t figure more regularly in endurance races. Mark Wynne was 13th with 36.19 and Greg Callaghan was second O50 on 26th with 38.14. Kirsty Longley was again prominent in the Women’s race, 23rd in 37.27. She was third female overall but first Over 35. In the 5K Aaron Jarvis ran a terrific 16.10.
At Croxteth Parkrun John Halson ran a year’s best of 18.36, while Robbie Wood ran 19.41
Charles Gains