You are here: Home > Owen Southern reaches for the top

Owen Southern reaches for the top

The weather was unexpectedly kind at Blackburn’s Witton Park for the Mid-Lancs Track and Field League match. Liverpool Pembroke Sefton had a decent turn out although there were numerous unfilled gaps. Probably the best performance came from Under 15 Owen Southern who rose to a magnificent 1.74m in the High Jump, a height that qualifies him for the English Schools Championships. This could be his breakthrough season. Assistant Coach, Billy Williams, was another winner at 1.75m and will be looking a little nervously over his shoulder as some of the younger members of the squad close in on him.
The high jumpers again excelled with Freedom Doran(1.60m) second to Owen and Sadie McNulty(1.46m) and Imogen Ayres(1.40m) taking 1-2 at Under 15. Senior Debbie Dasse was another winner(1.50m)and Niamh Doyle(1.35m) and Zara Bradshaw(1.30m) were second and third at U13. Mark Roberts leapt 1.30m.The Long Jumpers are beginning to make matching progress. Under 17 Triple Jumpers Matt Ingram(11.84m) and Andrew Hind(10.07m) went 2-3 and in the Long Jump Matt won with an excellent 5.73m. Erin Birchall is growing in stature and she took the Under 13 event with 4.59m with Sadie McNulty on 4.43m. Martha Simms joined the celebrations at U13 with second spot of 4.02m and there was a string of other LPS girls close behind.
The sprint action came from a fourth placed Morgan Greaves-Thomas with a 11.90 100m posting. At U15 Callum Garvey looked good in the 100m(12.90) but was even better at 200m(25.50). Similarly Lauren Lewis was good at 100m (13.60) but even more impressive at 200m(27.40). Erin Birchall ran a quick 100m(13.9) and Alice Prescott a smart 200m(28.10). The were plenty of other U13 aspiring 100m athletes led by Abigail Bamber(14.20).
The throws saw coach Dave Brown win the Javelin with 33.30m but he will be more than pleased at seeing one of his group U17 Will Hind throw 38.74m for second slot.
The middle distance story saw U17 Adam Jones take complete control of his 800m with a 2.12.70 timing while U15s Joe Houghton(2.12.40) and Tom Dickenson(2.14.20) continued their two lap journey with excellent times as well. Overall the afternoon was characterised the emergence of a lot of young athletes climbing their respective ladders and of whom more will be heard as the season progresses. Overall the males finished fourth in their competition and the females third.
The Liverpool 10K saw Kirsty Longley yet again triumphant in the Women`s event with a great 36.45. Paul Milburn was 18th with 35.41. Almost unnoticed in the O50 category Andrew Conway ran 43.57, evidence of his continued progress. In the 5K Lisa Gawthorne, returning after a knee operation was a useful second with 20.13. KirstyMcKenzie ran 22.14 and Lauren Wilson 23.12.
At the Master`s Championships Clare Constable took two titles the 200m and 400m(65.2).
Over at Halifax two of our vets John Halson & Robbie Wood took part in the Bluebell 10 mile trail race and both turned in respecatble runs. This tough trail race has an incredible steep road section called the troop which would bring tears to the eyes of seasoned fell runner and has you paddling through the river Calder in the final section. 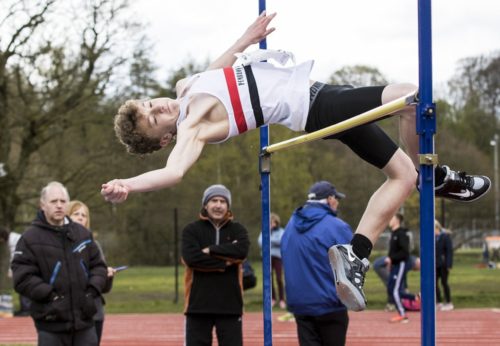