Liverpool Pembroke & Sefton athletes clinched individual and team medals as they contested the county cross country championships on Saturday. The Merseyside event took place at Arrowe park where conditions were soft underfoot, but with no wind and winter sunshine for most of the day, conditions were perfect for running.
Kirsty Longley claimed the senior women’s title with a comfortable victory by 27 sec and with it the over 35 title. Although well supported by Helen Sahgal(8) & Hilary Honeyball(10), they were one short of a team. Dan Slater was never troubled on his way to victory in the U20 men’s race with a winning margin of over 1 minute & Joe Gordon can be pleased with his 5th placed finish. There was a great team performance from the U15 Girls who claimed the silver medal behind Wirral AC. Jenny Williamson was the first home in 8th place, but the rest were not far behind, with an excellent run from Hannah Doyle(10), followed by Faye Hannaway(11), Pheobe Lucas(13) & Niamh Doyle(17).
It was the veterans who made up the senior men’s team, with Kevin Usher(11) taking the O45 title, John Halson (46) second O55 and Chris Pedder (48) third O55. Bernie Murphy(53), Mark Hudson (92) and Andy Conway(102) made up the team which finished 7th. There were some creditable performances in the U11 age group, with Nathan Naylor 7th and Evan Williams 13th, while Eve Hannaway was 10th in the girls race. At U13 level, Gideon Lucas was 14th and James Read 19th, with Cara Tamburro 23rd & Rachel Curzon 24th in the girls race.
Conditions were similar at Witton Park, Blackburn for the Lancashire championships. Pride of place went to the U20 women who took the gold medal in the team event, thanks to Morag Molyneux (7), Anna Hulme (9) & Flossie Dickinson (10). The U17 men’s team took silver in their race, with Tom Dickinson (4), Ross Harrison(5) & Adam Jones (8), finishing just behind Preston. There was an individual bronze for Dan Jones in the U20 race, with Glenn Sherwin finishing in 13th place. The U15 Boys finished a team in 5th place. They were led by Oliver Sutcliffe in 9th place, all the more remarkable as he finished the race carrying one shoe.Matthew Russo ((23), Daniel Howells (27) & Jared Nicholls (30) made up the team.
Isaac Dickinson had a good run for the U11’s finishing 7th, with Charlie Rotherham 29th. In the same age group, Georgia Hurst was 14th in the girls race and Amy English 23rd.At U13 level, both girls and boys were one short of a team. Kate Sutcliffe (24), Olivia Morga (33) & Kate Mullen (48) ran for the girls, with Nicholas Usher (17), James Roberts ((38) & Jack Hitchmough running for the boys. The club had 3 runners in the senior men’s race with Kyle Nicholls finishing in 70th place, Mike Gall (93) & John Dickinson (113)
Runners can now focus on the Mid-Lancs League, with the race next Saturday at Towneley park in Burnley. 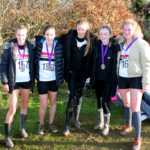 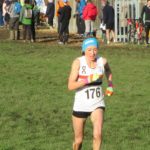 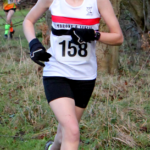 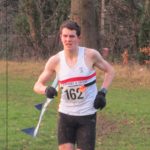 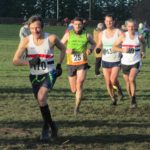