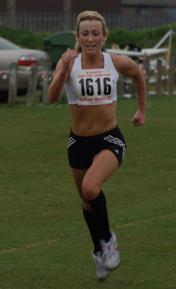 produce some significant performances and markers for the season. The sprinters still have a major presence as evidenced by the double Under 17 win over 400m of Adam Thomson(52.00) and Mike Stam(57.1) plus a similar double in the U13 200m by Alex Higham(29.2) and Andrew Freeman(29.5). But elsewhere other disciplines are advancing. The throwers, for instance, are having spectacular early season success especially Mick Jones who dominated the U17 Hammer(35.07) and Discus(32.47) ably supported by B winner Brad Brennan with 31.78 and 27.69. Brad enjoyed his A moment collecting the Shot with 11.09. Jess Broady(26.45) and Abby McComb(16.28) enjoyed similar double glory in the Hammer.

The club’s jumpers are also edging into the frame with U17 first place long jumper Tom Stafford(5.33) and Abby McComb high jumping 1.40 but it was something of a day for the runners as well. Emma Givens(14.00) and Grace Stewart(16.1) combined in the U17 80m hurdles to give the club an unusual success at this event and Grace also ran away with the 300m Hurdles with a 53.4 timing. U17 Chris Hesketh emphasised his emergence as a steeplechaser taking the 1500m race in 4.38.3 and at U15 Sean Kirkbride(4.43.5) and Kyle Nicholls(5.06) saw off the opposition in the 1500m. But it was probably the performance of David Forrester(U17) that stole the limelight as he fought out a gruelling battle with the talented Crehan of Wigan to storm home in the 800m with a 2.00.3 timing and immediately declare a 1.58.0 target for the coming weeks. Diligent Kisty winning the Waterll 5k work elsewhere against quality opposition from Sheffield, Wakefield and Wigan gave LPS victory in the match and a great start to the campaign.

Another athlete setting the highest possible standards is the club`s Isle of Man member Charlotte Christian who threw a magnificent 36.73 Hammer at the club`s other weekend engagement, the Northern Senior match at Ellesmere Port. Her target is 40m and a place in the forthcoming Junior Commonwealth Games. Team mate Rachel Hutchinson was the successful back up with 33.24 but also was equally pleased to take the Pole Vault with 2.30 and set a new club record. Club sprinters cleared up the 100 and 200 metres Mike Zaim(11.1 and 22.2) and Danny Higham(11.3 and 22.5) and Jack McGinn ran a superb 400m in 48.9 well clear of the opposition. Paul Milburn hurdled well to win the 400m(61.4) Kirsty Longley was a delighted winner of the 1500m(5.07.2) as well as taking her favourite event the 3000m in 10.52.3.This was not the end of her busy weekend as she won the Waterloo 5k on Bank Holiday Monday  As usual veteran Mark Line was a prolific point gatherer in the field together with Mark Hodge and Mike Jones. Almost as a tradition the men took the 4 x 100m and 4 x 400m relays comfortable and the accrued points took LPS to third in the table.

Forrester and Hesketh join the elite
The county track and field championships saw Liverpool Pembroke and Sefton at both Lancashire and Merseyside. Seven medals were collected at Blackpool and an astonishing 26 at Wavertree. The seaside resort provided two gold medals with Jess Broady taking the Under 17 Hammer with 28.60m and Jack McGinn continuing his impressive run of one lap performances with a stunning U 20 49.30.

Over in Liverpool the highlights included a parallel win for club mate, Danny Higham in the U20 400m(49.7) after an epic struggle with the talented Chris Smith of the Wirral and a split second dip at the tape. The club`s depth in this event was further evidenced as Adam Thomson took the U17 event in 52.5. But there were even more exciting developments elsewhere. David Forrester, a former U15 Northern Cross Country Champion, has experienced a lean winter but now is emerging as one of the country`s best U17 1500m runners. His relentless pace took him well clear of the opposition with a time of 4.02.6 which propels him to the top rank of metric milers. Similarly, in the same age group, Chris Hesketh continues to establish himself as a premier 1500m Steeplechaser with a 4.32.9 win. Both will be hungrily eyeing the National Championships later in the season. The club throwers were also impressive winners of their respective events namely Michael Jones(U17 Discus 36.40), Drew Atherton( U15 Javelin 36.19) and Emma Carter(U17 Javelin 29.37).

After a silver medal at Wavertree in the Senior 3000m(10.46) on the Saturday Kirsty Longley turned her attention to the massively supported Liverpool Women`s 10K Road Race on the Sunday. Brimming with confidence she finished third in 40.25 to collect an array of prizes. Meanwhile, a little earlier in the week, club international star, Michael Rimmer, began his quest for Olympic glory by posting a sparkling 2.19.7 for 1000m at a Stretford evening meeting holding off arch rival Tom Lancashire of Bolton.
11 May

A tremendous start to the championship season for our two talented youngsters. Congratulations David and Chris!
14 May

A tough time at Leeds
Travelling to Leeds to take on powerful opposition in the shape of the local club, Sale Harriers Manchester and Blackpool was never going to be an easy task for Liverpool Pembroke Sefton especially not at full strength. Still there was much to savour. At Under 17 the club`s rising middle distance stars enjoyed success especially Chris Hesketh who won out on a dip in the 400m Hurdles(61.7) but was well clear in his favourite event the 1500m Steeplechase in a respectable 4.39.0. David Forrester forsook his 1500m specialism to run the 3000m and left the opposition in disarray to record 9.11.7. Other A winners in this age group included Tom Stafford(400m 52.9), Brad Brennan(Shot Putt 11.35) and Billy Williams(High Jump 1.68m).

Observers of the local scene will have noticed the effect coach Dave McComb Snr is having on high jumping standards. In addition to Billy he also had winners in the shape of son Dave(U13 1.25m) and U15 Girls Zoe Rafferty and Alice Donnelly who doubled up to take maximum points both recording leaps of 1.45m. Hidden away in results there is often evidence of another possible star in the making. In this case it is Under 13 Girl Twanda Lunghu who was second in both the 75m with 10.5 and 150m in 20.4 plus an impressive winning 4.29 long jump. Her 150m time was the only Grade 1 performance of the afternoon for LPS.
After a somewhat heady victory in the first YA match this was down to earth time and the club finished well behind Sale and Leeds but sufficiently close to Blackpool to suggest their next opponents at Preston will not read too much into this result.
18 May

Michael Rimmer sets his targets for the season
Michael ran the 800m at the Watford BMC Grand Prix meeting winning in a sharp 1.47.16 but declared himself disappointed. He told Athletics Weekly `The pacemaker was a 1500m guy and I felt I was jogging at halfway.  I`m a bit disappointed…I`d have liked another second but it will do’. He then declared his `targets’.  `I`d love to win the Trials 800m three years in a row., not many have done that, and I know Coe and Ovett didn`t manage it.’ Asked about a second goal he simply said `Olympic final’.
He goes on now to Belgium and Oslo for further Grand Prix meetings.
22 May

Hesketh and Forrester best in the North 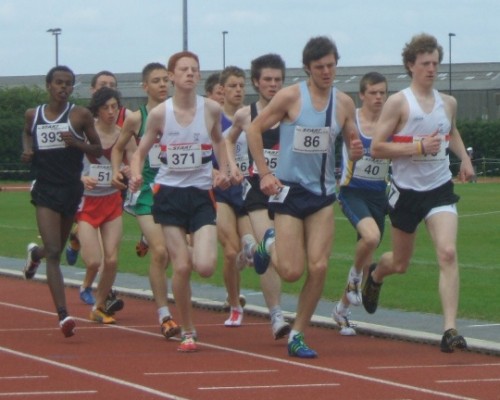 Liverpool Pembroke Sefton had a profitable time at Wigan in the Northern Under 17 and Under 15 Championships. The current spectacular form of Chris Hesketh and David Forrester was confirmed as they were both convincing champions. Hesketh stamped his authority on the U17 1500m Steeplechase from the outset leading throughout and apart from a few hesitant hurdle clearances came home with a useful time of 4.33.47 that could easily have taken him under the magic 4.30 if pressurised. The Tarleton High School pupil will have to wait for tougher competition to achieve that aim. The blustery conditions did not help but were even more in evidence as David Forrester tackled his favourite event the U17 1500m. After coasting through his heat he toyed with the opposition taking command with 600m to go and surging over the last 150m. His time of 4.10.99 was some way off an earlier season posting but the Birkdale boy will be content with that performance. Fellow school mate, Toby Loveridge, faded in the final of the same event but will be pleased with his heat time of 4.18.60.

The club’s throwers are gaining recognition and respect throughout the region and Michael Carmona-Jones enhanced this with a silver medal throw in the U17 Discus of 41.45m. This is a huge personal best and coach, Rose Hutchinson, was delighted with this breakthrough. Elsewhere Adam Thomson was a useful fifth in the U17 400m Final with a 51.56 timing and there were a flurry of good results in the 800m heats, the U17 produced Mike Bride(2.5.48), Jake Helm(2.6.99) and Chris Hatton(2.8.55) and Under 15 counterparts George Curran and Warren Turner recorded 2.24.52 and 2.33.48 respectively. 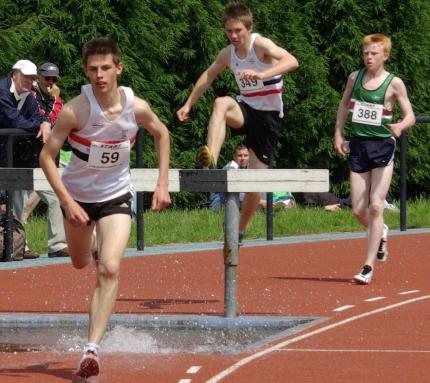 Chris Hesketh on route to gold.

The clash with the Northern Championships affected the local National Junior League match at Bebington which was poorly supported and largely lacklustre. Of the small LPS contingent Harry Doran’s 200m win in 23.00 and Danny Higham’s 400m(50.7) caught the eye as did Charlotte Christian’s easy winning Hammer Throw of 33.33m and Shot Putt victory of 8.75m. The club was 4th and remain third overall. Serious questions, though, will be asked about the future of this competition
25th May