Grade 1 performance from Adam Thomson
In the third of the rotating Young Athletes Premier League matches Liverpool Pembroke Sefton were at Preston Arena for an exciting encounter even though LPS were only to emerge third on the day. Beaten narrowly into second spot Adam Thomson probably deserved the nod for best club performance with a personal best Under 17 400m in 51.2. He is coming into form at the right moment with major events in the offing. The club,s talented three middle distance `musketeers’ duly collected maximum points in their events with David Forrester taking both the 800m(2.02.7) and 1500m(4.19.1), Toby Loveridge the 3000m(9.29.2) and Chris Hesketh the 1500m Steeplechase(4.59.8). All were untroubled. The Shot Putt also provided a double victory with Brad Brennan (11.15m) and Simon Birch(9.26m). Similarly Jessica Broady was far too good for her opponents at both Discus(21.82m) and Hammer(27.52m). The club’s strength at Under 17 was underlined by another double in the High Jump Billy Williams(1.73m) and super-understudy Simon Birch(1.50m).
The club’s High Jump renaissance continued at Under 15 with both Alice Donnelly and Zoe Rafferty cleaning up with 1.40m leaps. The Under 13 girls are also beginning to claim their share of the current limelight in particular Emily Canning, a superb 75m hurdle winner(13.5) plus, naturally, a 1.28m High Jump win and team mate Tawanda Lunghu looking equally dominant in her favourite event the Long Jump(3.91m). Coach Mike Dandy is beginning to see some real talent emerging from his training group.
1st June

Close fought encounter
Liverpool Pembroke Sefton have a reputation in track and field matches for overtaking their opponents in the latter stages of an afternoon to clinch victory. In the Division 2  Northern Senior League fixture at Wavertree it was the turn of local rivals Preston AC to surge in the dying moments and snatch the result after LPS had led throughout the competition. The gap was a mere 8 points and with West Cheshire lurking nearby made for a highly entertaining June encounter.

Numerous encouraging features included the return to competition after a couple of months of Ormskirk international sprinter Phil Taylor who took the 200m in 22.4 well clear of other competitors and a useful 48 second split in the 4 x 400m relay team. The sprinters were really enjoying themselves with Michael Zaim second in both the A 100m(11.0 ) and B 200m(22.8) plus team mate Alex Stokes comfortably winning the B 100m event in 11.1. Ormskirk is getting a reputation as an athletics town with Taylor,  Zaim and 400m winner Mark Grimshaw(50.3) all residents. The distance men were also on song and Adam Clansey took first in the 1500m(4.19.7) partnered by B winner Edge Hill student, Clark Roberts(4.32.7). Bernie Murphy used his tactical knowledge to good effect taking the 3000m Steeplechase(10.20.5) and second spot in the 5000m(16.03.6). Paul Milburn recorded 60.9 in the 400m hurdles to also come home first. The clubs indefatigable veteran decathlete, Mark Line, had his usual busy point gathering fiesta which included winning the pole vault(3.30m) and Mark Leicester added a long jump(6.67m) victory to a 400m B(52.1) result. The 4 x 110m and 4 x 400m relay teams were once more emphatic victors.

The women were also in form as June Swift, another Ormskirk local, was untroubled in the 800m with 2.17.8 and the effervescent Kirsty Longley the 1500m(5.00.7).The throwers are guaranteed gold plate performers led, on this occasion, by Charlotte Christian and Rachel Hutchinson A and B winners of the Hammer with 35.93m and 31.16m respectively and diligent point gatherers in other disciplines. As usual emerging talent attracts attention even if not necessarily a winning result. In this case it was Philippa Makepiece(200m with 26.8) and a Fay Atkins long jump leap of 5.15m.
The club consolidates its overall third position but Preston and West Cheshire will be looking over their shoulders.
7 June

Rimmer named for European Cup spot
Michael Rimmer(800m) has been selected for the GB European Cup team to be held later this month in Annecy, France.
10 June 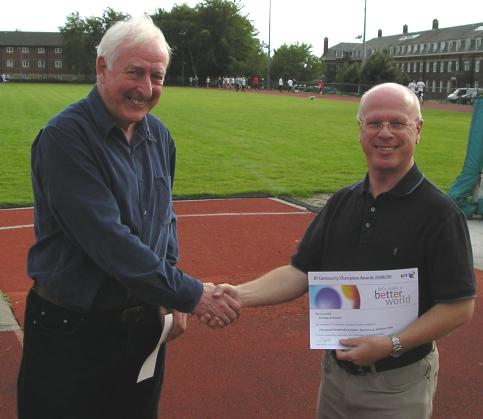 The club has received a BT Community Champions Award for £215:00 mainly through the efforts of Club treasurer George Leicester. George who is an employee of BT Openreach applied for the grant after  Trish Farrell had approached Club Chairman Charles Gains to see if the club could afford a camcorder to assist club coaches in event and training analysis. Charlie asked George if we could, afford the item which in turn set the ball rolling on the application .

The award almost covers the full cost of the item. Many thanks to George on his fine work not only as our trusted treasurer but also in getting this very welcome grant.
11 June

Doran is back!
The injury sustained by Harry Doran some 12 months ago would have deterred many athletes from continuing in the sport but sheer persistence and endeavour has brought its reward. At Manchester’s SportCity Doran stormed to the Northern Under 20 400m title in a very impressive 48.58 looking every bit a champion and his confidence fully recovered. The only challenge came from his Liverpool Pembroke team mate Nathan Hilton breathing down his neck in 48.62 and looking equally majestic. To cap it all for the club Danny Higham was sixth in the same final with 50.13.

Another LPS sprinter on song was Michael Zaim who looked very impressive in the Senior 200m final, fourth but mightily satisfied with a personal best time of 22.0. It was a less good day for international Phil Taylor, yet to find his form this season, who had to settle for a modest 49.10 in fifth place in the 400m. Another 4th spot was claimed by Mark Leicester in the Long Jump with a respectable 6.66m but one of the most delighted LPS members was U20 Tom Hanlon just failing to make the 800m final but recording a breakthrough personal best of 1.58.98.

An avalanche of excellent performances for the club at the Merseyside School Championships at Wavertree. This time the field event members chalked up the more eye-catching performances. Billy Williams leapt an incredible 12cm above his personal best to capture the Intermediate Boys High Jump with 1.85m while Junior Hammer thrower winner Tom Johnson broke through into the quality listings with 41.12m. Other Intermediate top podium positions were recorded by Adam Thomson(400m in 52.0), David Forrester(800m in 2.01.3) Toby Loveridge(1500m in 4.18.5) and Mike Jones(Discus with 38.17m). The boys didn`t have it all their own way as Emily Carter showed her class taking the Javelin title with 29.30m. Other medallists included Juniors George Curran (3rd 1500m in 4.48.2), Drew Atherton( 2nd Javelin with 38.86m), Kevin Jones(3rd Javelin with 35.06) and Andrew Hutchinson(2nd Pole Vault with 1.80m) plus Inters Callum Burns(3rd 400m in 53.8) and Sean Dignam(3rd 800m in 2.08.5). Year 7 girl Emily Canning picked up two medals(2nd High Jump 1.30m and 3rd Long Jump 3.87m). Senior Rachel Hutchinson took a bronze in her favourite Hammer event with 33.14m.

No results to hand from the Lancashire Schools at Blackpool but Chris Hesketh as anticipated ran away with the 1500m Steeplechase only to find times had not unfortunately been taken! However, his very impressive record should guarantee him a place in the English Schools line-up.
15 June

Nathan Hilton goes under 49 seconds,
Three Liverpool Pembroke Sefton one lap specialists were at Bedford for the England Under 20 Championships. All progressed to the semi-finals where their journey ended but recorded excellent times en route. Probably the best result came from Nathan Hilton who broke through the 49 seconds barrier with 48.97 narrowly shading club colleague Harry Doran on 48.99 and Jack McGinn with 49.02. If there were an England 4 x 400m relay championships the club would be prominent contenders!

The club’s young athletes were meanwhile at Liverpool`s Wavertree Stadium for one of the regular league matches. High winds destroyed chances of quality performances even leading to the cancellation of some field events and it was a day largely for grinding out results. The Under 17 men responded with no fewer than 12 wins including three A and B doubles in the shape of Adam Thomson(24.4) and Tom Stafford(24.8) in the 200m, Chris Hatton(2.08.5) and Sean Dignam(2.09.4) at 800m and 1500m specialists David Forrester(4.23.9) and Mike Bride(4.32.5). Three were well clear elsewhere, Callum Burns(53.2 for 400m), Toby Loveridge(9.48.7 for 3000m) and 1500m Steeplechase star Chris Hesketh(4.47.7). Two field eventers joined in with Billy Williams high jumping 1.75m and long jumping 4.98m in the B event. Brad Brennan took the Shot with a useful 11.32 putt.

There were fewer wins in the other age groups although at Under 15 Andrew Hutchinson collected first in the Pole Vault(2.00m), an event that was transferred indoors, and Kevin Jones was the B Javelin victor(30.41m). Annie McLoughlin`s smooth hurdling edged her a result at 75m(12.4) while Alice Donnelly, part of the booming high jump group, took her B event with 1.40m. Amelia McLaughlin was also a B hurdle winner in the Under 13 girls 70m. Increasingly, though, the girl to watch in this age group is Tawanda Lungu, impressive 75m flat winner(11.3) and long jumping 4.20m.
The list of hard won second and third placings gave hope throughout the afternoon that LPS would finish second to the large and powerful Liverpool Harrier team but yet again slipped behind in the closing stages to be overtaken by Wirral AC by a mere six points. Still the club should have done enough to survive in this quality Northern premier league next season.
22 June

Nathan continues fine run 29 June
Liverpool Pembroke Sefton’s Nathan Hilton continues to impress. At the National Junior League match at Wavertree he was the winner of the 400m with 49.5 seconds, not quite at the same level as two recent sub-49 postings but enough to come home relatively untroubled. This caught the eye of the officials and he was awarded the Male Athlete of the Match award. Close rival Harry Doran chose the 200m on this occasion and will be pleased with 22.9. However, the most prolific scorer for the club was triple winner Tony West with a Shot Putt of 9.17m, Hammer of 37.69m and Javelin 39.35m. The Men’s relays were a virtual walk over for the club’s Hilton, Doran, Danny Higham and Ross Helms who combined effectively in the 4 x 100m(45.1) and 4 x 400m(3.31.8).

Charlotte Christian not unexpectedly was the A winner of the Hammer (34.34m) and Rachel Hutchinson managed three B string firsts (Hammer 32.25m), Javelin(14.77m) and Shot (7.94m) but what characterised this meet was not just the poor turn out from LPS but an across the board paucity of athletes from all clubs. LPS finished fourth on the day and will stay in this division next season but few events managed a full complement of six competitors and several had none at all. Club officials and administrators have to ask themselves whether this level of competition is now worth the effort and expense of staging. The respective AGM’s of the leagues in the autumn have to come up with a more attractive format than this.
The list of hard won second and third placings gave hope throughout the afternoon that LPS would finish second to the large and powerful Liverpool Harrier team but yet again slipped behind in the closing stages to be overtaken by Wirral AC by a mere six points. Still the club should have done enough to survive in this quality Northern premier league next season.
29 June