Rimmer back on course
By his high standards Michael Rimmer has had an indifferent run up to the Olympics. Among other performances he has recorded a 1.47.2 800m in Berlin and a 1.47.10 in Ostrava, season`s best by a UK runner but some way off other international performers. However, this was turned around in Milan as he won a quality race in 1.46.10 with something to spare.
2 July 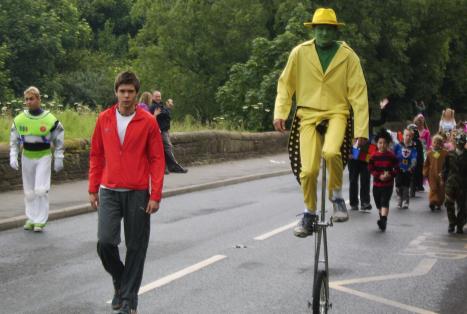 Halsall Village Carnival
In a final desperate attempt to get a personal best for the season Mike Bride takes up unicycling and snatches the lead in the Halsall Village Carnival procession. But tracking him and looking distinctly unimpressed is Wayne Ashall who was using the occasion as part of his build up for a place in the England Junior Commonwealth Games in the autumn. A tense finish ensued but they both sadly lost out to the Village Queen who came past on a skate board in the later stages making unladylike gestures.
6 July

Gloom at Carlisle
Poor weather and a poor turn out contributed to the LPS gloom at Carlisle for the third of the Northern League encounters. But the one person who can always raise a smile is Kirsty Longley who took the 1500m once again in 4.59.2 and secured a second spot in the 3000m with 10.42.8. Rachel Hutchinson was another good winner with a Hammer Throw of 31.8m. Abby McComb, Grace Stewart and Becky Foster completed the women’s squad and there can be no praise too high for the points they garnered across a variety of events.
The men were better represented, the performances that stood out probably most were those coming from Michael Zaim and Phil Taylor who combined to take both the 100m and 200m, 11.4/11.4 and 22.8/23.3 respectively. Phil also won the 400m, his favourite event, with 50.4. With the track events on a roll Adam Clansey snatched the 800m(2.00.1) and only just missed out on the 1500m(2nd in 4.12.6). Bernie Murphy was solid in the 3000m SC(2nd 10.17.6) and 5000m(3rd 16.04.3). Elsewhere Ross Nelms, Paul Rudkin, Paul Jamieson, Mike Dandy, Dave McComb and the indefatigable Mark Line were mopping up minor placing across a raft of events. All hands to the pump but their efforts were in vain as the club limped home in 6th and last place. The good news was that LPS clung on to its overall third spot and a decent performance in the final match at Litherland should confirm this.
6th July

Beijing Bound
Michael Rimmer stormed to a third consecutive National and Olympic Trials 800m title at Birmingham. He crossed the line with three fingers raised to signify the first person in 32 years to achieve the feat since his hero the legendary Steve Ovett. His time was a modest 1.49.13 but the manner in which he controlled the race before destroying the opposition in the finishing straight was extremely impressive. His Olympic dream is realised and he is bound for Beijing. He becomes the fifth man in the Liverpool Pembroke Sefton combined history to achieve the honour after Jack Rimmer (Paris 1900, distance running), Billy Clarke (London 1908, Marathon), Ken Anderson (London 1948, sprints) and Alex Kruger (Seoul 1988, Decathlon Results

Also now dreaming of distant glory will be Tarleton’s Chris Hesketh who took a major step in winning the bronze medal in the English Schools Intermediate 1500m Steeplechase in Gateshead in a personal best time of 4.29.87. Two stronger runners were in front but coach, John Bradshaw, in describing his flawless technique declared him the only serious steeplechaser in the field. We will hear a lot more about Chris. Senior Nathan Hilton nearly made the podium in finishing fourth in the 400m(48.82) with club mate Harry Doran(48.88) a hairsbreadth away in fifth. Both were Merseyside and with Greater Manchester colleague, Jack McGinn, also finishing 8th(49.52) the LPS club had an astonishing final three with England international, Wayne Ashall, sidelined. It`s hard to think of any club in the country that can match that sort of depth of one lap talent.

Intermediate Adam Thomson made his 400m final with a prior semi-final time of 50.22, a personal best, but he will rue suffering a disqualification for a lane infringement. Also on the down side other LPS athletes Danny Higham(200m) and Dave Forrester(1500m) failed to progress through their heats and the club’s throwers Tom Johnson and Mike Carmona Jones had a similarly dismal afternoon. However, they will all have learnt from competing at this very high level.
13 July

Rimmer moves up another Gear
Michael Rimmer’s 800m Olympic preparations continued as he tackled another strong international field in Barcelona. A slow first lap of 54 seconds guaranteed a close, sharp finish with barely a second covering the first six. The Moroccan Laalou edged the verdict with a time of 1.44.85 with three Kenyans, a Spaniard and Rimmer in close attendance. Michael was given sixth in 1.45.89 a season’s best time and he will be well satisfied with this Iberian outing. He goes into a final Aviva Grand Prix meeting in London with his confidence boosted as Beijing begins to loom.

The final Northern Premier Young Athletes meeting took Liverpool Pembroke Sefton athletes across the Pennines to Hull. Currently the club’s strength is at Under 17 and it was not surprising that there was a cascade of first placings in this age group. Adam Thomson led with a 200m win in 23.5 followed by an impressive middle distance collection of results. Sean Dignam(800m 2.05.0), Mike Bride(1500m 4.21.3) partnered with Jake Helm(4.32.2) and a similar result for Toby Loveridge9 9.46.3) and John Meakin(10.32) at 3000m. Inevitably Chris Hesketh collected the 1500m steeplechase at his leisure(5.00.3). The throwers and jumpers were also on form, Michael Carmona Jones winning the Discus with 30.14m and Billy Williams the High Jump(1.81m). The coaching of Dave Street was also in evidence with his two triple jumpers Dean Matthews(11.69m) and Stuart Dolman(9.88m) mopping up. The Girls also pitched in with fine wins from Jess Broady (Hammer 29.35m) and Faye Atkins (High Jump 1.55m).

There was a lot of endeavour in the lower age groups including useful victories by Under 15`s Drew Atherton (Javelin 39.46) and Annie McLoughlin(75m Hurdles 12.2) but the indications are that next season the club will have to raise its game to survive this tough league. As it was LPS finished third on the day and in the final comfort zone but it is going to require a tough winter’s training to keep up this pace in 2009.
20 July 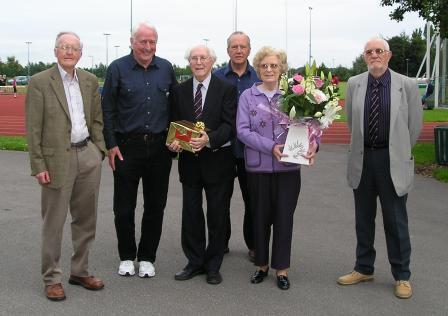 After serving Pembroke and now LPS for over 40 years Les Williams has finally retired. As a coach, official and administrator he had made a huge contribution to the sport both at club level and Merseyside County. At a special presentation ceremony he was given some quality glassware from the club and county to remind him of his time in the sport. His wife, Brenda, was presented with a beautiful bouquet, appropriately purchased from Bill Hartley`s farm shop. The club will miss his gentle presence.
22 July

Michael Magnificent
Michael Rimmer was at the Aviva London Grand Prix meeting at Crystal Palace, the last major event before he heads off with the British Olympic team to their pre-Olympics camp in Macau. The UK 800m champion was conscious that the week previous in Barcelona he had run a quick time even though elbowed badly into sixth spot in the finishing straight. He was determined to stay out of trouble on this occasion and it paid off handsomely as the Canadian Gary Reed fell in the early stages of the race disrupting those around him. Michael stayed wide and tracked the pacemaker, Tangui of Kenya, through a first lap of 50.69. As the field bunched on the final bend Rimmer accelerated and chased the winner Abraham Chepkirwok to the tape narrowly failing to catch the Ugandan in a season`s best time of 1.45.76. His preparations for Beijing now look back on course after some early season problems.

At the other end of the scale Liverpool Pembroke Sefton were at Deeside for the final match of the National Junior League (Mersey Division). With only 9 athletes available the club should have been on the receiving end of a thrashing but with three other clubs in a worse position LPS ran out third on the day and third overall. Harry Doran’s 400m in 50.4 won him the Male Athlete of the Match award but there were other useful results from victors Nathan Hilton(200m in 22.9) and Billy Williams (High Jump with 1.80m). The club dominated, as usual, the 4 x 100m relay with 46.3(Ross Nelms, Callum Burns, Doran and Hilton) and the 4 x 400m relay in 3.39.3(Wayne Ashall, Nelms, Doran and Hilton). Grace Stewart also took the 400m Hurdles race in 76.1. Toria Swift and Niciole Garner toiled hard for points elsewhere but there is no doubt this competition is dying on its feet as only the two composite clubs, North Wales and Cheshire Tigers, look at all presentable. There has been a stubbornness among clubs to face the reality of all this and consider a radical overhaul. `Never mind, it will be better next year’ just won’t do anymore.
27 July

PB for Michael Rimmer and new club record
Michael Rimmer continues to make fantastic progress at 800m and has finally ducked under 1.45.00. In a star studded field in Monaco Michael was brilliantly placed third with 200m to go when the pacemaker, Sammy Tangui (Kenya), failed to get out of the way in time and Rimmer ran into him. By now the leaders were gone but Michael stuck gamely to the task and came home 6th behind the winner Yuriy Borzakovskiy of Russia ((1.42.79). He was, however, rewarded with a personal best time of 1.44.68 and will be greatly encouraged as he makes his way to Beijing.