You are here: Home > Challenging hills and record rankings

The Cuerden Valley cross country course is the most challenging of the series in the Mid-Lancs League. The continual ups and downs offer little opportunity for even paced running but it did suit many in the Liverpool Pembroke Sefton contingent The Under 17 Men looked strong with Oliver Sutcliffe(4), Tom Corcoran(8) and Daniel Howells(10) but even this tight packing only sufficed for third team in a knife edge encounter. The Under 15 Boys were out in force again and also looked good for team victory with Jake Dickinson(5), Michael Henderson(8) and Jared Nicholls(13) but again tight competitiveness left them with only third spot. The back-up boys were Stanley Benson(15), Gideon Lucas(17), Se Loughlin(20) and Nicholas Usher(26).

At U13 another decent turnout gave the squad fourth courtesy of James Read(11), Harry Cain(20) and Isaac Dickinson(21) with support from Nathan Taylor(35), Oliver Farrer(41) and Conrad Lewis(44). At U11 there was one brave soul Tony Farrer(27). Finally, in the Senior Men`s race Tom Corlett ran extremely strongly to finish 29th overall but 3rd in the U20 category.

The Under 17 trio was led by a smooth running Jennifer Williamson(6) and with Phoebe Lucas(8) and Bethhany Swift(10) the team win was assured. At U15 Emily Williamson(27) and Ruth Usher(29) battled hard as did the U13 trio of Chloe Bousfield(40), Hannah Williamson(45) and Amy English(47) for 8th team. Sarah Yates at U11 continues to impress in 6th spot with Kate Nicholson on 16th. The final league tables for this league will be scrutinised to see just how well LPS performed over the season.

A clutch of LPS seniors were at the Halewood 5K looking for quick times which they got in abundance. In 7th place Tiffany Penfold ran a highly impressive 16.43 which hoists her into the top three in the current UK lists. She also set a new club record, beating Kirsty’s previous record by 1 second. Mark Wynne(16.00) and Chris Maher(16.01) were first and second not quite replicating their form previously at Armagh. U17 Fletcher Foster was 8th in an impressive 17.38 but some of the best results came in the older age groups. 045 Tony O’Brien(17.00), 060 Graham Cairns(20.00) and O70 John Dobie(24.28) now find themselves at the heady heights of the top half dozen Masters or so in the UK. Also enjoying a fine afternoon were Danny Gilbody(19.09), Vicky Gilbody(20.04) and Robbie Wood(20.38). 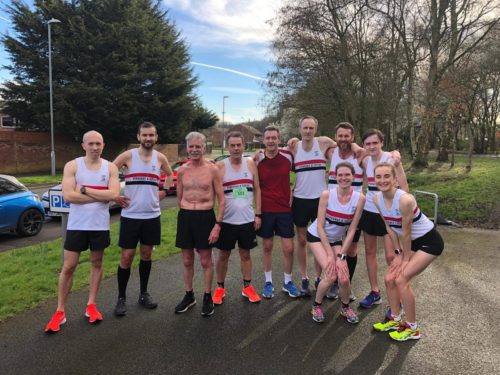 ← Tiff toughs it out at Leeds
County pride →