You are here: Home > Splendid day at Birkenhead Park

The Northern Mens 12 Stage and Womens 6 Stage Road Relays are a highlight of the sporting calendar and returned again to the excellent surroundings of Birkenhead Park. The sun shone on competitors particularly the Liverpool Pembroke Sefton contingent. The combination of short and long legs tests the capacity and resilience of the numerous clubs involved.

The club`s international Tiffany Penfold was in fine form. Following Debbie Campbell`s (18) strong first leg Tiffany took off in immaculate style slicing through the field to 11th slot and simultaneously running the fastest short leg time of the day in 12.54. The athletic fraternity are beginning to notice this talented athlete. Brave Laura Purdy(16) and Vicky Gilbody(15) were next in but a lack of two further women meant LPS were sadly incomplete.

Coach Mark Bleasdale and Captain Mark Wynne have completed a remarkable transformation of the club`s male endurance squad`s fortunes. Enthusiasm abounds reflected in two full teams competing plus five additional stalwarts. Club captain, Mark Wynne took, as usual, the primary responsibility of leading off on Stage 1 with an excellent 25.11 but such was the quality on this initial charge he was 29th. But this was about to be transformed. Luke Edwards is the ideal second leg specialist and he zipped through to 18th(12.26) recording the club`s best short leg time of the day. Dan Slater(25.21) retained the momentum and was followed by young Adam Jones who gained a place with 12.55. Chris Maher(24.46) then turned in the fastest long leg time of the day for the club gaining two places. Dan Jones(12.39) held this spot comfortably.

Halfway and things looked very promising. Ross Harrison, another young star in the making, shouldered a long leg responsibility with aplomb keeping the club in a sound 15th position(25.42) in a field of about 70. Tony O`Brien who is experiencing an exceptional resurgence advanced one place(12.39) followed by a sharp Jonathan Bride(12.42) also edging up one. Kevin Usher fought hard(13.44) dropping slightly to 15th but the last two Mike Gall(13.23) also on 15th and Sam Carr(13.49) bringing the club home 14th completed the best recordable result in 25 years.

This was something of a special occasion as the club`s senior endurance athletes begin to close down this most successful of seasons. There is still, of course, the National Road Relays at Birmingham to come, a trip that will be relished. 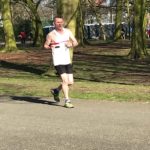 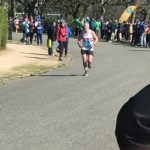 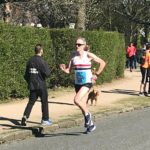 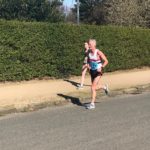 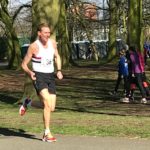 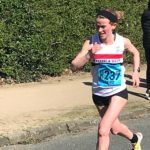 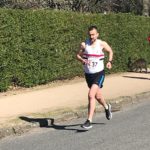 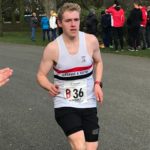 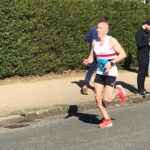 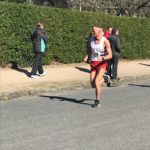 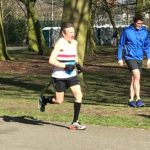 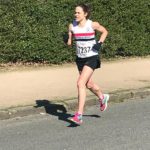 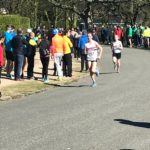 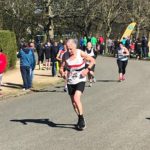 ← English Schools at Leeds
Another great run from Tiffany →