You are here: Home > Dan and Rosie conquer the mud to take county titles

Dan and Rosie conquer the mud to take county titles

The Merseyside contingent of Liverpool Pembroke Sefton were at a very muddy Arrowe Park for the County Cross Country Championships. Dan Slater continued his amazing form in the Under 17 men`s race. After a drawn out battle with local rival Ford of Liverpool Harriers his superior strength came into play and he surged away to a seven second victory. Matt Richardson was having his personal battles further down the field but in gaining sixth spot he found himself in line for a possible inter-county selection berth. Joe Martin ran strongly for ninth.
At Under 20 Rosie Johnson looked the class act she undoubtedly is. Well clear of the chasing pack she eased to a comfortable win. Next event will be a representative spot for the North in an inter-area match in Antrim, Northern Ireland.
Vying for the title of the best performance of the day was Aaron Jarvis`s second place in the U20 male race. This is something of a breakthrough for him and he looked clearly comfortable in a leading pack. Jonathan Bride was a good sixth.
In the Senior Women’s race Kirsty Longley had to yield ground on this occasion to great rivals Rachel Burns of Liverpool Harriers and Amanda Crook of the Southport Waterloo club but she was able to add to her bronze a team silver medal as Clare Constable(15) and Vicki Jones(16) packed well. It was left to a courageous Kirsty McKenzie(31) to close in for smiles all round.
Elsewhere the club was team-less with Jennifer Williamson(9), Emily Brough(22) and Emily Williamson(28) in the Under 13s and a sole Joe Houghton(9) in the Under 15s. The Senior Men only had five but Mark Wynne had a splendid race to finish 8th and take the first over-40 medal. John Halson(44) second over 55, Chris Pedder(63), Robbie Wood(74) and Danny Gilbody(87) completed. Merseyside Results
The Lancashire Championships were at an equally sodden Witton Park, Blackburn. There were no individual medallists. At Under 13 there were two runners Lois Owens(11) and Grace Mitchell(41) and only Fran Price(27) in the Under 15 race. However, LPS fielded four at Under 17, Morag Molyneux(8), Anna Hulme(10), Charlotte Mawdsley(11) and Flossie Dickenson(13) and this was sufficient for silver medals. Corinne Molyneux(5) and Maxine Thompson(7) chased county selection places in the Ladies U20 event. Julie Lang was 74th in the Senior race.
James Roberts(21) was a lone representative in the Under 11 race.There were three at U13, Mark Roberts(17), Jake Dickinson(22) and Matthew Russo(25), one short of a team. There was better team news in the U15 race though as Tom Dickenson(14), Ryan Treanor(17), Adam Jones(22) and Alex Lang(29) packed sufficiently well for bronze medals. The best performance of the Lancs day probably came from Dan Jones who was fourth at U17. With James Metcalfe(19) and Glen Sherwin(20) they were fourth team. Joe Chadderton was 18th in the U20s. Lancashire Results
Report Charles Gains
Photos Eddie Bairstow 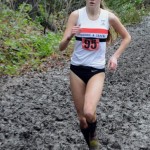 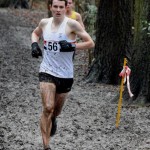 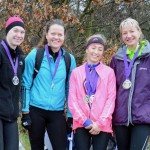 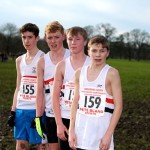 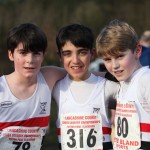 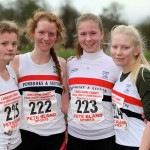